ON THIS VESAK POYA DAY, LET US RECALL THE SUBLIME TEACHINGS OF THE BUDDHA - THE UNIVERSAL LOVE AND UNIVERSAL COMPASSION. 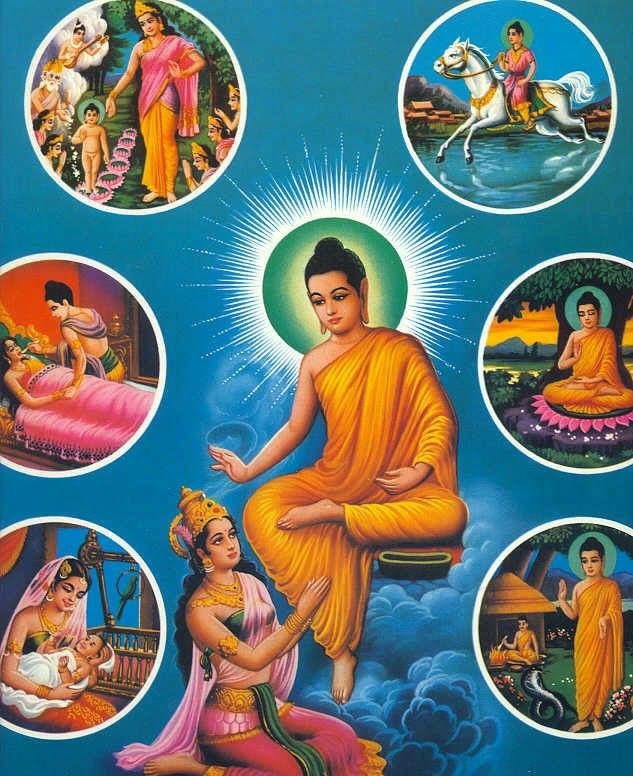 “All tremble at force, dear is life to all.
Likening others to one-self,
Kill not nor cause to kill.”

(Dhammapada 130)
What is Universal Compassion?

“Do not destroy: do not kill.”
Here the quality that is being inculcated is compassion. Disagreements and disputes arise due to lack of compassion. A universal compassion arises only when there is the perception of true reality (through the realisation of the Four Noble Truths). Compassion expresses itself through wholesome action. Compassion is not merely thinking compassionate thoughts. It has to show itself through compassionate action. Compassion is taking note of the suffering of other being in the world. It overcomes callous indifference to the plight of suffering beings, human or otherwise. Likewise, it must be reflected in one’s life by a willingness to go out of one’s way to give aid where possible and to help those in distress. It has the advantage of reducing one’s selfishness by understanding other’s sorrows. It is Lord Buddha’s medicine for cruelty, for how can one harm others when one has seen how much they have to suffer already. It has also two enemies: the “near” one is mere grief, while its “far” enemy is cruelty. 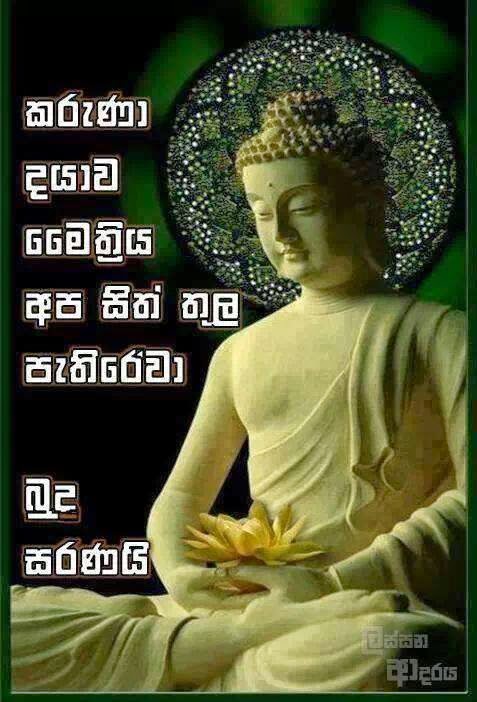 Genuine compassion for a Buddhist practitioner is to wish for the well being of another, for every living being through the universe. Whether people are beautiful or plain, friendly or cruel, ultimately they are human beings just like one-self. They want happiness and love, and do not want suffering. Their right to overcome suffering and to be happy is equal to one’s own. So when you recognise that all beings are equal in both their desire for happiness and their right to obtain it, you automatically feel empathy and closeness to them. This wish is not selective. It applies equally to all beings.

Meta is the first of the four sublime states. It means that which softens one’s heart, or the state of a true friend. It is defined as the sincere wish for the welfare and genuine happiness of all living beings without exception. It is also explained as the friendly disposition, for a genuine friend sincerely wishes for the welfare of his/her friend.
“Just as a mother protects her only child even at the risk of her life, even so one should cultivate boundless living-kindness towards all living beings” is the advice of the Buddha. It is not the passionate love of the mother towards her child that is stressed here, but her sincere wish for the genuine welfare of her child. Metta is neither carnal love nor personal affection, for grief inevitably arises from both.  Metta is not mere neighbourliness, for it makes no distinction between neighbours and others. Metta is not religious brotherhood, for it embraces all living beings including animals, our lesser brethren and sisters that need greater compassion as they are helpless. 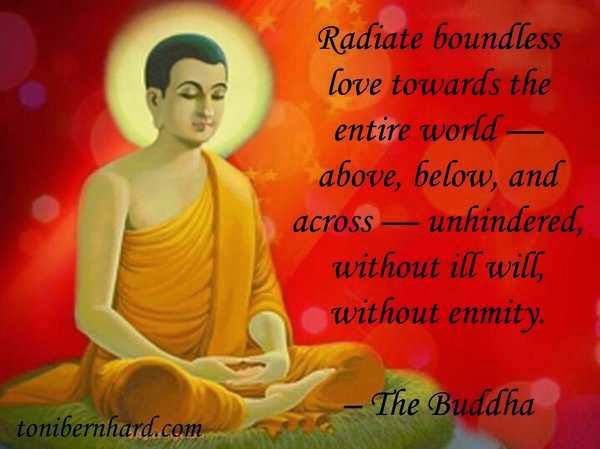 Sweet Metta transcends all these kinds of narrow brotherhood. It is limitless in scope and range. Barriers it has none.  Discrimination it makes not. Metta enables one to regard the whole world as one’s motherland and all as fellow-beings. Just as the sun sheds its rays on all without any distinction, even so Sublime Metta bestows its sweet blessings equally on the pleasant and the unpleasant, on rich and poor, on the high and, on low, on the vicious and the virtuous, on man and woman, and human and animal. 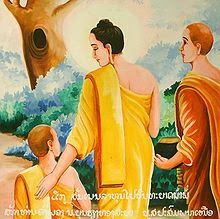 Such was the boundless Metta of the Buddha who worked for the welfare and happiness of those who loved Him as well as those who hated Him and even attended to harm Him and kill Him.

The Buddha exercised Metta equally towards His own son Rahula, His adversary Devadatta, His attendant Ananda, His admires and His opponents. This loving-kindness should be extended in equal measure towards oneself as towards friend, foe and neutral alike.

In exercising this boundless loving-kindness one-self should not be ignored. This subtle point should not be misunderstood, for self-sacrifice is another sweet virtue and egolessness is yet another higher virtue. The culmination of this Metta is the identification of oneself with all beings (sabbattata), making no difference between oneself and others. The so called I is lost in the whole. Separatism evaporates. Oneness is realised.

There is no proper English equivalent for this graceful Pali term Metta. Goodwill, loving-kindness, benevolence and universal love are suggested as the best renderings. The antithesis of Metta is anger, ill-will, hatred, or aversion. Metta cannot co-exist with anger or vengeful conduct [Treasury of Truth – By Most Ven. Weragoda Sarada Maha Thero]. 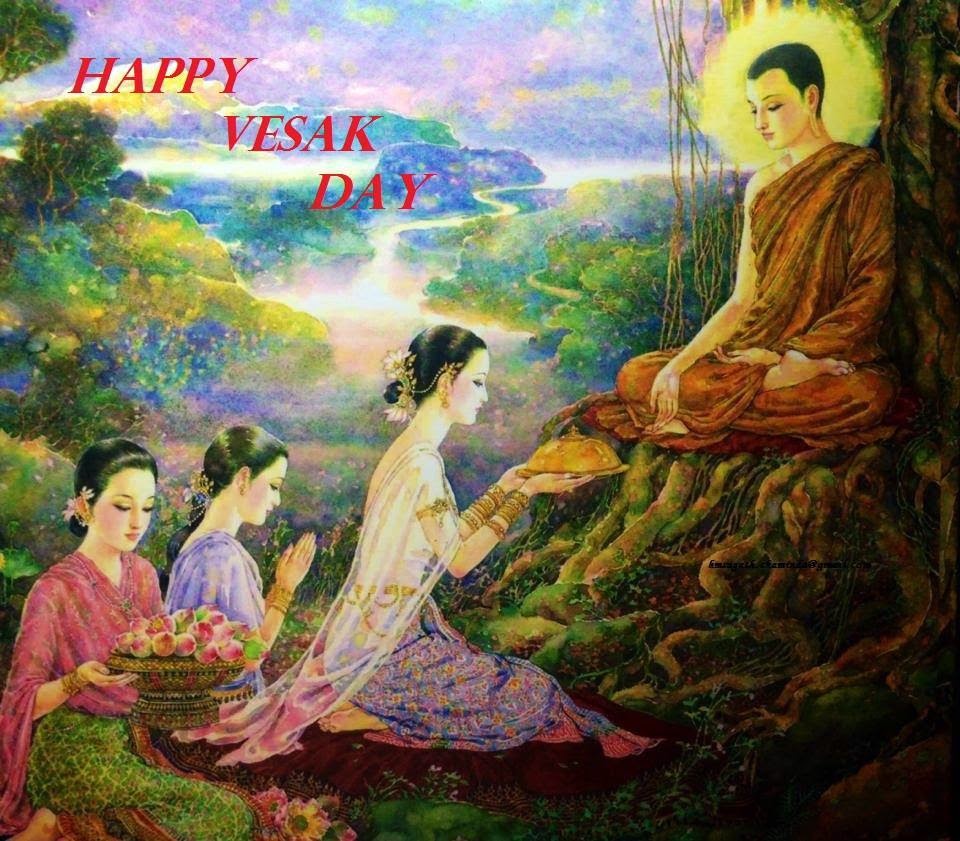 There are some who believe That Buddhism is so lofty and sublime a system that it cannot practiced by ordinary men and women in this workaday world of ours, and that one has to retire from it to a monastery, or to some quite place, if one desires to be a true Buddhist.
This is a sad misconception, due evidently to a lack of understanding of the teaching of the Buddha. People run to such hasty and wrong conclusions as a result of their hearing, or reading casually, something about Buddhism written by someone, who as he has not understood the subject in all its aspects, gives only a partial and lopsided view of it. The Buddha’s teaching is meant not only for monks and nuns in monasteries, but also for ordinary men and women living at home with their families. The Noble Eightfold Path, which is the Buddhist way of life, is meant for all, without distinction of any kind. 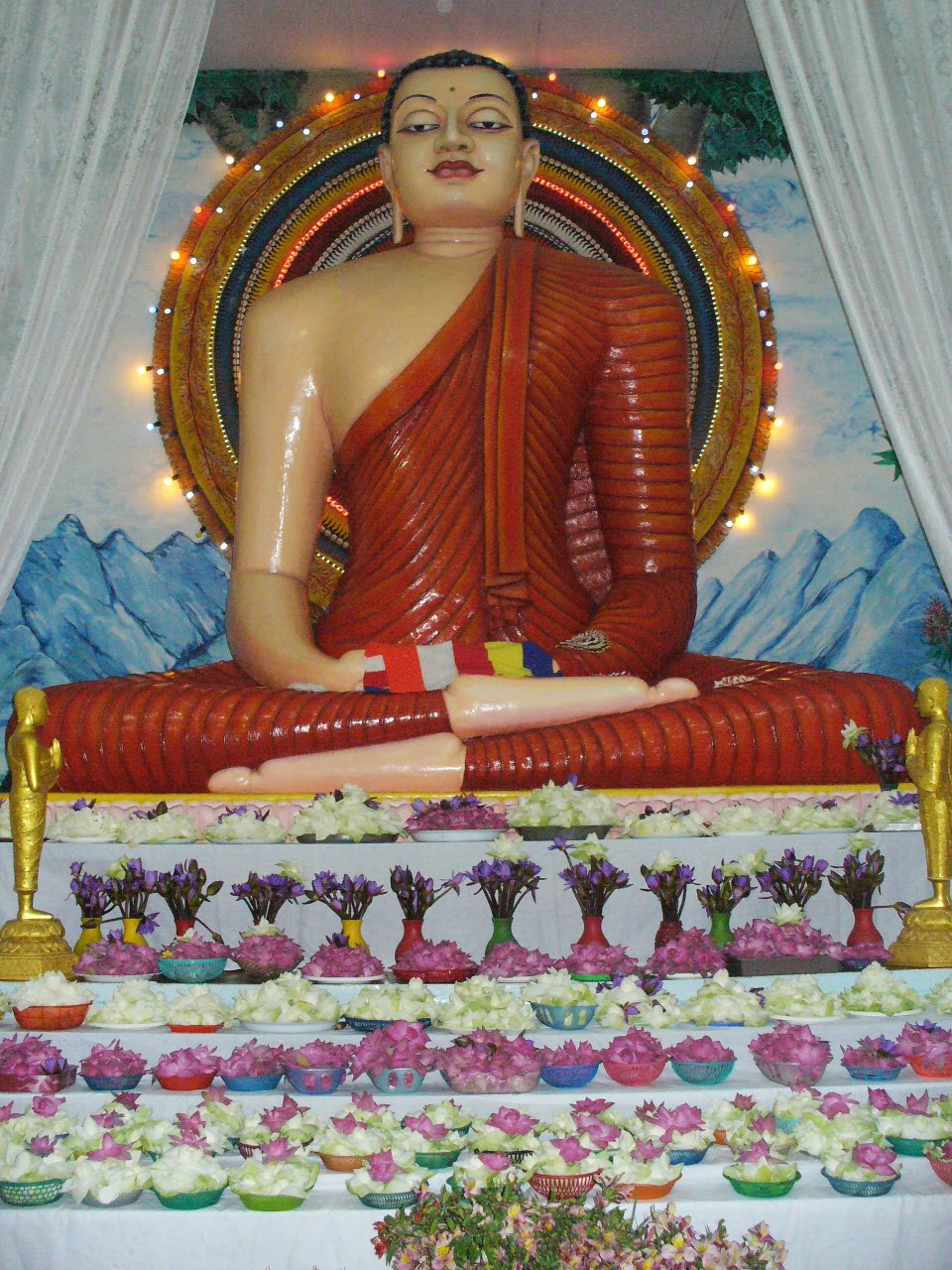 The vast majority of people in the world cannot turn monk or nun, or retire into caves or forests. However noble and pure Buddhism may be, it would be useless to the mass of mankind if they could not follow it in their daily life in the world of today. But if you understand the spirit of Buddhism correctly (and not only its letter), you can surely follow and practise it while living the life of an ordinary man and woman.

It may be agreeable for certain people to live a retired life in a quiet place away from noise and disturbance. But it is certainly more praiseworthy and courageous to practice Buddhism living among your fellow beings, helping them and being of service to them. It may perhaps be useful in some cases for a man to live in retirement for a time in order to improve his mind and character, as preliminary moral, spiritual and intellectual training, to be strong enough to come out later and help others. But if a man lives all his life in solitude, thinking only of his own happiness and “salvation,” without caring for his fellows, this surely is not in compassion, and service to others. 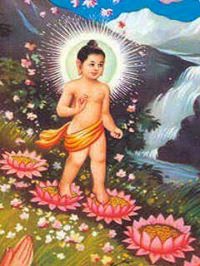 One might now ask: If man can follow Buddhism while living the life of an ordinary layman, why was the Sanga, the Order of Monks, established by the Buddha?  The Order provides opportunity for those who are willing to devote their lives not only to their own spiritual and intellectual development, but also the service of others.

An ordinary layman with a family cannot be expected to devote his whole life to the service of others, whereas a monk or nun who has no family responsibilities or any other worldly ties, is in a position to devote his/her life for the good of the many, according to the Buddha’s advice. That is how in the course of the history, the Buddhist monastery became not only a spiritual centre, but also a centre of learning culture.
The Sigala-Sutta (Diga-Nikaya) shows with what great respect the layman’s life, his/her family and social relations are regarded by the Buddha. We see then that the lay life, with its family and social relations, is included in the “Noble Discipline,” and is within the framework of the Buddhist way of life,  as the Buddha envisaged it.
So in Samyutta-Nikaya, one of the oldest Pali texts, Sakka, the king of the Gods (devas), declares that he worships not only the monks and nuns who live a virtuous holy life, but also ‘lay disciples (upasaka & upasika) who perform meritorious deeds, who are virtuous, and maintain their families righteously.’

THE LAST WORDS OF THE BUDDHA

Then the Blessed One addressed the venerable Ananda: “It may be, Ananda, that to some of you the thought may come: “Here are (we have) the Words of the Teacher who is gone; our Teacher we have with us no more. But Ananda, it should not be considered in this light. What I have taught and laid down, Ananda, as Doctrine (Dhamma) and Discipline (Vinaya), this will be your teacher when I am gone.” 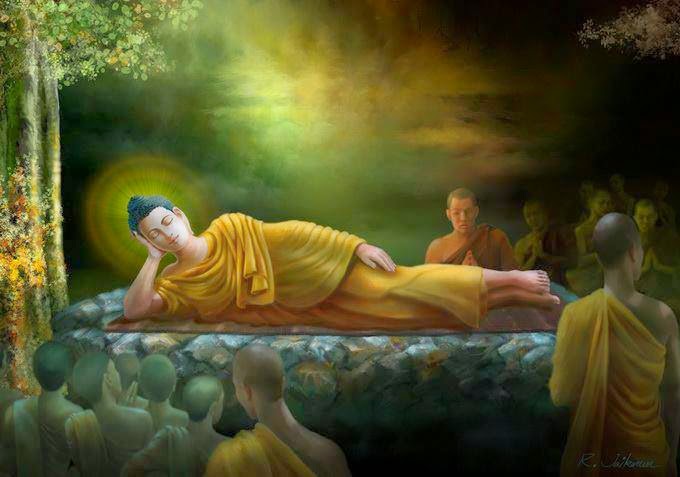 The Blessed One, when asked the Bhikkhus if they have any doubts or any questions to inquire, the Bhikkhus remained silent. Then the blessed One addressed the Bhikkhus, saying: “Then Bhikkhus, I address you now: Transient are conditioned things. Try to accomplish your aim with diligence.” These were the last words of the Tathagatta. (From the Mahaparinibbana-Sutta of the Diga-Nikay, Sutta No. 16) 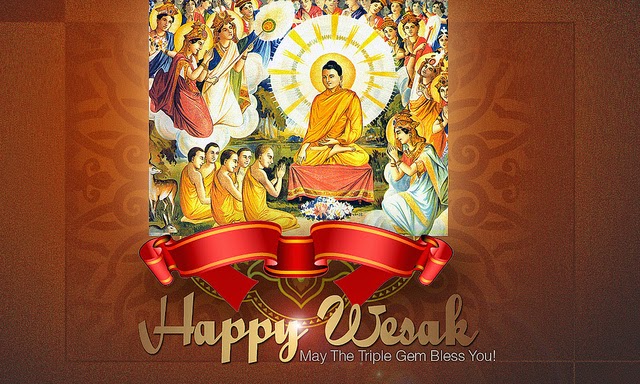