ALL TREMBLE AT VIOLENCE, ALL FEAR DEATH, TAKING ONE AS THE EXAMPLE, KILL NOT, HURT NOT - KARMA AND RE-BIRTH 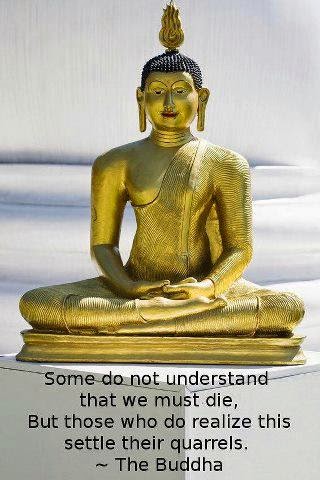 While residing at Jetawana Monastery, the Buddha spoke this verse, with reference to a group of six monks.

Once a group of monks was cleaning up a building in the Jetavana Monastery with the intention of occupying it, when they were interrupted in their task by another group of monks who had arrived at the scene. The monks who had come later told the first group of monks who were cleaning the building, “We are elderly and more senior to you, so you had better accord us every respect and give way to us; we are going to occupy this place and nothing will stop us from doing so.”

News of the commotion had reached the Buddha who, on learning about the quarrel between the two groups of monks, admonished them and introduced the disciplinary rule whereby monks should refrain from hurting one another.

Muccuno bhayanti:
Fear of death. Buddhism has analysed the phenomenon of death quite extensively. The Paticca-Samuppada describes the process of rebirth in subtle technical terms and assigns death to one of the following four cases:

1.   Janaka Kamma – (Reproductive Kamma) Exhaustion of the reproductive
karmic energy (karmakaya).
The Buddhist belief is that, as a rule, the thought, volition, or desire, which is extremely strong during life time, becomes predominant at the time of death and conditions the subsequent birth. In this last thought-process is present a special potentiality. When this potential energy of this reproductive (Janaka), Karma is exhausted, the organic activities of the material form in which is embodied the life force, cease even before the end of the life-span in that particular place. This often happens in the case of beings that are born in states of misery (apaya) but it can also happen in other planes.

This moment of birth is explained in Abhidhamma as Rebirth-Linking moment which is the moment followed by the moment of death of a being in previous life. Rebirth-Linking moment too is just one conscious moment where the first consciousness (patisandi citta) takes place. Simultaneously the concomitant mental factors which form the aggregates of Feeling (Vedana), Perceptions (Sanna), and Mental Formations (Sankara) arise along with the Patisandhi citta which is the consciousness aggregate. The arising of the materiality aggregate too takes place at the same moment along with the four mental aggregates. This is the general condition of the birth of a being having the five aggregates. According to the Theravada tradition there is no in between life known as Antarabhava. 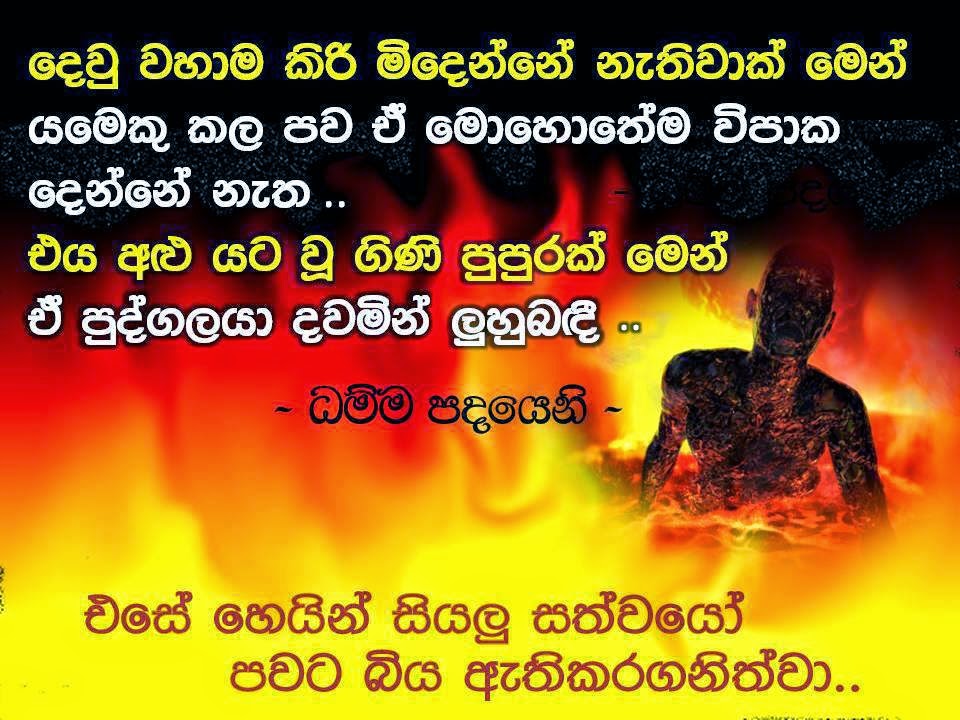 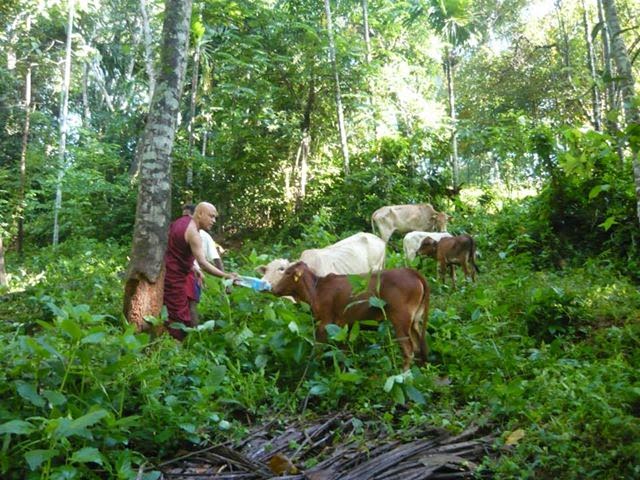 2.   The second expiration of the life- term (ayukkhanda), Upatthambhaka Kamma-
(supportive Kamma) which varies in different planes. Natural deaths, due to old age, may be caused under this category. There are different planes of existence with varying age limits. Irrespective of the karmic force that has yet to run, one must, however, succumb to death when the maximum age –limit is reached. If the reproductive karmic force is extremely powerful, the karmic energy rematerializes itself in the same plane or, as in case of devas, in some higher realm.

The opposing action of a stronger kamma unexpectedly obstructing the flow of the reproductive kamma before the life-term expires (upacchedaka-kamma). Sudden untimely deaths of persons and the deaths of children are due to this cause. A more powerful opposing force can check the path of a flying arrow and bring it down to the ground. So a very powerful force of the past is capable of nullifying the potential energy of the last thought-process, and may thus destroy the psychic life of the being. The death of Devadatta, for instance, was due to a destructive kamma which he committed during his lifetime.  This is the strong kamma that totally destroys the effect of another kamma of the different character while it manifests. A person born in luxury and living in luxury may meet with untimely death as a result of Upagataka Akusala Kamma. Likewise a person born in misery and living in misery on account of an unwholesome kamma may suddenly ameliorated to prosperity by the operation of a wholesome Upaghataka Kamma.

What do we know about Rebirth? 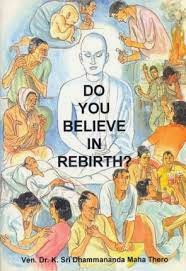 Specifically, within the Buddhist tradition, we have the testimony of the Buddha on the matter of rebirth. On the night of His enlightenment, the Buddha acquired three varieties of knowledge and the first of these was the detailed knowledge of His past lives. He was able to recollect the conditions in which He had been born in His past. He was able to remember what His names had been, what His occupations had been and so on. Besides the Buddha’s testimony, His prominent disciples were also able to recollect their past lives. Ven. Ananda, for instance, acquired the ability to recollect his past life soon after his ordination. Similarly, throughout the history of Buddhism, saints, scholars and meditators have been able to recollect their past lives.
“Professor Ian Stevenson of the University of Virginia's Department of Psychology has described dozens of cases of this type in his books. He is an accredited scientist whose 25 year study of people who remember former lives is very strong evidence for the Buddhist teaching of rebirth. Then, Professor Gustaf Stromberg, the famous Swedish astronomer, physicist and friend of Einstein also found the idea of rebirth appealing. Opinions differ whether human souls can be reincarnated on the earth or not. In 1936 a very interesting case was thoroughly investigated and reported by the government authorities in India. A girl (Shanti Devi from Delhi) could accurately describe her previous life (at Muttra, five hundred miles from Delhi) which ended about a year before her "second birth." She gave the name of her husband and child and described her home and life history. The investigating commission brought her to her former relatives, who verified all her statements.

Among the people of India reincarnations are regarded as commonplace; the astonishing thing for them in this case was the great number of facts the girl remembered. This and similar cases can be regarded as additional evidence for the theory of the indestructibility of memory. Professor Julian Huxley, the distinguished British scientist who was Director General of UNESCO believed that rebirth was quite in harmony with scientific thinking. There is nothing against a permanently surviving spirit-individuality being in some way given off at death, as a definite wireless message is given off by a sending apparatus working in a particular way.” (By Ven.S. Dhammaika, Buddhanet) http://www.buddhanet.net/e-learning/qanda05.htm 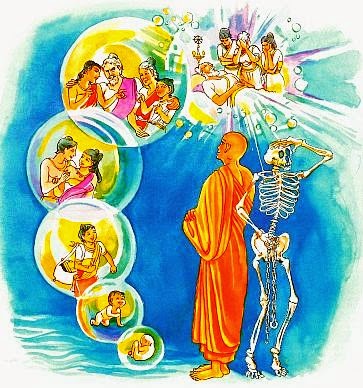 “It is possible but not very easy for us to actually verify our past lives. The nature of mind is such that it does not allow most people the recollection of their previous lives. Our minds are overpowered by the five hindrances: sensual desire, ill-will, sloth, restlessness and doubt. Because of these hindrances, our vision is earth-bound and hence we cannot visualize rebirths. Just as a mirror does not reflect an image when it is covered with dirt, so the mind does not allow most people the recollection of previous lives. We cannot see the stars during daytime, not because they are not there in the sky, but because they are outshone by the sunlight. Similarly, we cannot remember our past lives because our mind at present is always over-burdened with many thoughts in the present, day-to-day events and mundane circumstances.”
What Buddhists Believe
Venerable K. Sri Dhammananda Maha Thera
Very few people are indeed, are prepared to die. They want to live longer and longer, a delusion which contemporary research is making more possible to realise. The caving for more and more of this life is somewhat is toned down, if one believes, as many do, that this is only one life of a series. Plenty more lives are available to those who crave for them. The actual pains of dying are various and not all people go through physical agonies. But there is a distress of another sort; the frightful stress which are setup in the mind of one whose body is dying-against his/her will. This is really the final proof that the body does not belong to me, for if I did, I could do what-ever  I wanted with it: but at the time of Death, although I desire continued life, it just goes and dies, and there is nothing to be done about it. If I go towards death unprepared, then at the time when the body is dying, fearful insecurity will be experienced, the result of
having wrongly identified the body as my-self. 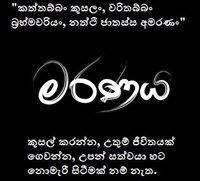 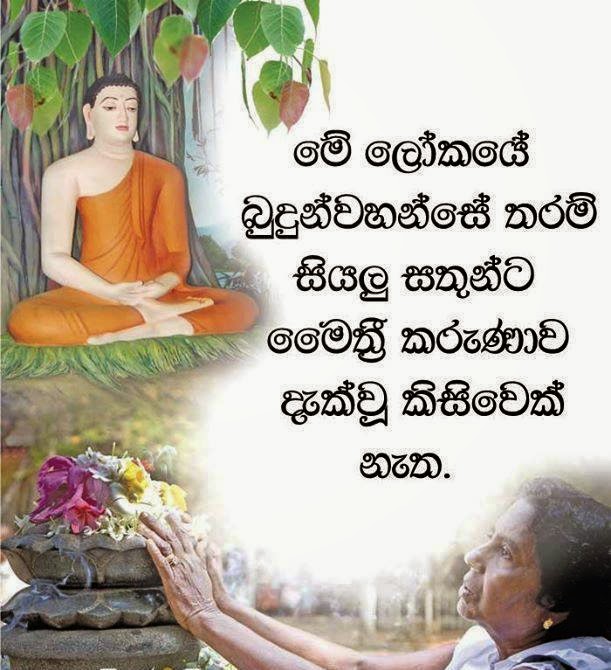 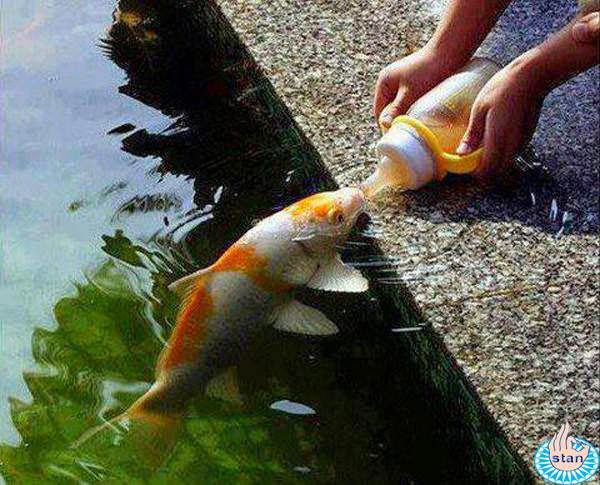 On realising this frightful stress, experienced by all beings, the Buddha spoke this verse ; “All tremble at violence, all fear Death. Comparing oneself with others do not harm, do not kill.”