VISAKA MAHA UPASIKA - THE GREAT BENEFACTRESS OF THE BUDDHA 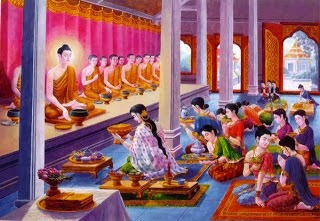 Visakha was the daughter of Dhananjaya. Her mother was Sumana Devi, and her
beloved grandfather was the rich man
Medaka. Medaka was a rich merchant who resided in the city of Bhaddiya, in ancient India. By nature, he was extremely generous. This was a quality he had acquired from previous births.

In a former birth, he had given away the last provisions of the family to a silent Buddha (Pacceka Budda).  His noble self-sacrifice gave him rich results and in his present life as Mendaka he was blessed with plenty. The provisions in his house were never exhausted.  His wife and son and even his domestic who had participated in that act of charity were as fortunate as Medaka.

Visakha the granddaughter of Mendaka had herself done many meritorious acts in past lives. Visahka used to accompany her grandfather to temple when she was barely six years old, when the Buddha visited with the Sanga, to the city of Bhaddiya, Visakha went to see the Buddha with her grandparents and her maidens and as advised, went up to the Buddha, saluted Him and sat respectfully at aside. The Buddha was pleased with her refined manners and he preached the Dhamma to her and others. Though young in age, she was comprehensively far advanced from a moral standpoint.  As, such immediately after hearing the Dhamma, she attained the first stage of sainthood
(sotapatti) at an early age. 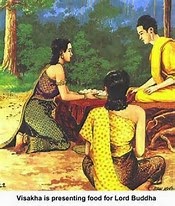 Books state that even in the prime of her youth she possessed masculine strength and was gifted with all womanly charms. Her hair was like a peacock’s tail when loosened it reached the hem of her skirt and then the ends of the hair curled and turned up-words. Her lips were of a bright red colour and were smooth and soft to the touch. Her teeth were white and evenly set without interstices and shown like a row of diamonds. Her skin, without the use of any cosmetic, was as smooth as a blue lotus-wreath and was of a golden colour. She retained her youthful appearance although she bore several children. Endowed with these five kinds of feminine beauty- hair, flesh, bone, skin and youth, young Visakha excelled both in worldly wisdom and spiritual insight.

Many eons earlier she had made a wish at the feet of Buddha Padumuttara to become the chief benefactress of a future Buddha and his Sanga.

Later Mendaka and his son Dananjaya with his family moved to Sakatha which was close to the capital city of Kosala – Sawasthi.

In Sawasthi there was a wealthy householder who had a young son Punnawaddana.
He was handsome and much sought after. How ever, he declared that he would some day marry only a girl who measured up to his expectations.
Migara, his father and the mother was often worried and discussed this matter telling that their son is not interested in marrying and settling down.

One day Migara spoke to his son, Punnawaddana, “Son it is time you married and settled down. Why don’t you take an interest in your future? Do you have a particular girl in view or would like us to choose a suitable partner for you?

Punnavaddana’s reply was that he shall take his wife only a girl who is endowed with the five signs of beauty.”

Migara instructed a team of Brahmins to roam the lanes and streets of India and scour the lanes and by lanes and villages and find a girl to fit the description given by Punnavaddhana who  possessed of these five beauties and of suitable status for his son.

A search was initiated to select a girl, but after many months of searching the Brahmins with great disappointment started their journey back home. Passing through Sakatha on a festival day. When the Brahmins were sitting in a hall on the bank of a river, they spotted a girl of about fifteen or sixteen of age in the company of a group of her friends.

When Visakha was fifteen or sixteen years old, on a certain festival day, she went on foot with her retinue in a holiday spirit to the river to bathe. Suddenly there arose an unexpected shower, and all but Young Visakha ungraciously ran as fast as they could and entered a hall where there Brahmins were seated. Visakha however, walked with measured tread in a dignified manner. The Brahmins were quick to make use of the opportunity. They thought that she looks like the ideal girl they were looking for and wanted to go and engage in a conversation with her.

They asked Visakha, “Young lady why didn’t you run with the others? You are already quiet wet. Visakha gently smiles and speaks:
“It is unbecoming for a king to run like an ordinary citizen. Even so it is most unbecoming for a young girl from a respectable family to run. In addition, Monks also get critics, when they run about like ordinary laymen. Likewise it is not dignified spectacle to see a woman running about like a man. When running if we trip on a rock or stone and get wounded and scarred we will be a burden to our parents.” 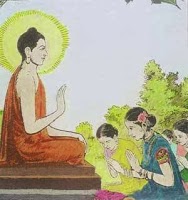 
After introductory preliminaries a date was fixed for the marriage of Visakha, the daughter of Dananjaya to Punnavaddhana the son of Megara.
Gold smiths manufactured jewelry for Visakha for nearly three months working day and night. Dhananjaya gifted his daughter much wealth, silken cloth, gold and silver and herds of cattle. A bevy of attendant maids was to accompany Visaka.

Visakha became the heiress to much wealth. Acts of charity in many earlier lives now bore fruit. Unswerving faith in the Blessing One, the Dhamma he preached and his noble fraternity of monks enabled Visakha to achieve the goal – the aspiration she made at the feet of Buddha Padumutra.

Upbringing in a family with deep religious connections molded Visakha’s character to a great extent.  Her boundless generosity was evident when she sold her valuable ornament,  Melapaladanawa, and constructed the monastery, Purvaramaya. It was also called, Migaramathu Pasadaya.   With her mates, Visakha visited Buddha and Sanga quite often and looked into all their needs. She gained special permission from the Buddha to look after the needs of all the visiting monks who entered the city.

Even though Visakha’s father-in-law Migara was a follower of the naked ascetics, Visaka’s courage and determination helped to convert her in-laws to Buddhism and attain stream-entry. The name Migara Matha came after this.

Her kindness to animals were evident at one time when she spent one whole night at the stable, helping a horse who was in labor pain.

As an industrious leader, Visakha maintained equality to all.  She was kind and caring at all times.

At a time when values are fast-changing and deteriorating, the life of Visakha is exemplary. A woman’s worth lies in her modesty, patience, simplicity, individuality, and dignity.
In one of the discourses that the Buddha delivered to Visakha, he spoke of the eight qualities in a woman that bring her welfare and happiness in this world and the next: "Herein, Visakha, a woman does her work well, she manages the servants, she respects her husband and she guards his wealth. Herein, Visakha, a woman has confidence (saddha) in the Buddha, Dhamma and Sangha; virtue (sila); charity (chaga); and wisdom (panna)."

Being a woman who had many talents, Visakha played an important role in various activities amongst the Buddha and his followers. At times, she was given the authority by the Buddha to settle disputes that arose amongst the nuns (bhikkhunis). Some Vinaya rules of discipline were also laid down for the nuns when she was called in to settle their disputes. 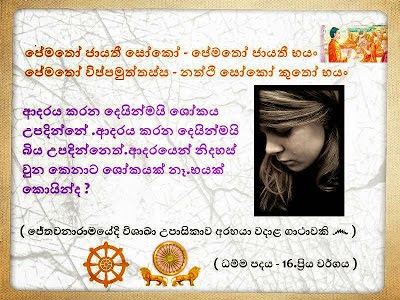 Visakha was an epitome of modesty and generosity. Virtuous and generous, firm in her convictions, she was a model female devotee. These were qualities she had cultivated during countless previous births. The books state that she had the good fortune to be the happy mother of ten fortunate sons and ten fortunate daughters. She died at the age of one hundred and twenty.

An heiress to greatest wealth Visakha was generous to the core. “One reaps what one sows, and one gets one deserves.”  So it has been with the benefactress – Visakha.
Posted by Ven.Sudhamma at 11:44 AM