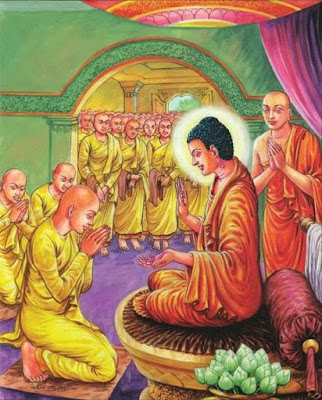 The Great Arahat Threi Mahāpajāpatī Gotami was the first female Sanga (Bhikkhuni) who paved the way for women to ordain as Buddhist nuns after breaking the barriers of womankind.

Family History
She was born in the city of Devdaha to the family of Suppabuddha as the younger sister of Mahamāyā. They both were two sisters of King Suppabuddha, who belonged to the Koliyan Clan.

Mahāpajāpatī Gotami was so called after her name because, at her birth, the fortune tellers prophesied that she would have a large following. Both sisters were married to King Suddhodana, leader of the Sakyan clan.

When Queen Maha Māyā died seven days after the birth of prince Sidhartha, Queen Pajāpati Gotami the maternal aunt became the adoptive mother who looked after prince Sidhartha and nursed him. She raised the prince and had her own children, Prince Siddhartha's half-brother Nanda and half-sister Nanda. It is said that she gave her own children to nurses and herself nursed the young prince. Queen Maha Prajapathi Gotami became prince Sidhartha's care giver, devoting all of her time and affection making sure he would grow up with everything he needed from a mother. Theri Maha Prajapathi Gotami passed away at the age of 120 in Vesali.

Gaining Affirmation from the Padumuttara Buddha

Many aeons ago during the time of the Buddha Pumatura, Queen Prajapathi was born as a daughter to a minister in the city of Hansawathi, in Dambadiva. One day the minister took her daughter and his workers to listen to the discourses of the Buddha. That day, the Buddha announced and placed his step mother as the Senior Bhikkhuni among the Bhikkhuni Sanga within his eighty female great disciples. The girl who had then listened to the preaching and had developed a great devotion and honor to the Buddha, heard and saw the announcement of the Senior Nun and thought how great it could be to have an opportunity to attain that position just as that Nun. From that day on wards she was inspired to become the senior Bhikkhuni disciple of a Buddha and decided to be dedicated towards that attainment, practising wholesome deeds.

She offered alms to The Buddha and his Sanga for 7 consecutive days practicing good virtues in order to become the most Senior Bhikkhuni in one of the future Buddha's dispensation. Having this wish in mind, that day she worshiped at the feet of the Pumatura Buddha. The Buddha foreseeing her wishes through his Super normal knowledge “Anawarana Gnana” knew that her wish was going to come true and confirmed her that her wish was going to come to live during the Gautama Buddha's dispensation. This was the first time she gained affirmation from The Buddha Padumuttara.

The happy girl determined to practise her precepts and observed higher precepts on full moon days etc. and engaged in meritorious deeds with many kind acts of generosity.

In this Badra Kalpa (aeon), after the dispensation of Kashyapa Buddha, during the reign of King Kasi, she was born to a daughter of a village worker and later married to a village head men. At that time five Paccheka Buddhas who lived near the footstep of Nandamulaka in Himalayas visited her village because they could not survive in the Himalayas due to heavy rains. She took over the leadership to take care of them and encouraged villages to prepare five dwelling huts and furniture to fit in for five Paccheka Buddhas who came to spend their rains retreat. They prepared walking meditation tracks, and provided medicine and all other requisites to the Buddhas. Because of this great act, she was reborn in heaven for many life times and again was said to have been reborn as the daughter of a head merchant who was engaged in the trade of thread spinning. In that birth she had the opportunity of meeting five hundred Pachchaka Buddhas, where she was able to offer arms and supported them with their requisites and then after death she was reborn in haven and enjoyed many heavenly pleasures through out many life times before she was reborn as the daughter of King Suprabuddha, during the Gautama Buddha's dispensation.

Seeking Permission to be Ordained as a Nun
When Gauthama the Buddha visited the City of Kimbulwat, to assist his mother, father and relatives with his teachings,  after listening to the Dhamma sermon preached by the Buddha, Maha Prajapathhi Gotami attained Sotapanna (stream enter-ere). After King Suddhodana passed away, Mahapajapati Gotami decided to gain ordination. Mahapajapati Gotami went to the Buddha and asked to be ordained into the Sangha.

The Buddha refused her and continued on to Vesāli. Courageous, Gotami cut off her hair and wearing yellow robes, with a large number of Sakyan ladies followed the Buddha to Vesāli on foot. When she arrived there, she repeated her request to be ordained. The Buddha refused once again.

Perhaps Buddha would have felt that it was not the right time for nuns to gain entry into Sanga because women were viewed as inferior beings during the time this impacting event took place. A Buddha has to know that his ministry of assembly needed to be accomplished with the four fold sanga of Bhikkhu, Bhikkhuni, Upasaka and Upasika.  This is how all previous Buddhas  had assembled their ministries.  According to the Pali Cannon, the past lives of the Buddha and Arahats, are recorded in Buddha Wansaya, Anagatha Wansaya etc. These historic recordings show evidence of past lives of the Buddha and his great male and female disciples and how they fulfilled their perfections in order to fulfill their wishes to be reborn in the dispensation of the Gautama Buddha. Then the Buddha's refusal thrice to formulate a Bhikkhuni order could have been the fact that conditions were not favorable for women to take leadership roles in that period of time in India and probably he would have wanted more time to be well prepared to face the reactions that would arise after ordaining the nuns. How ever at the third time when she arrived by foot to Vesali, Ven. Ananda Thero, one of the principal disciples and an attendant of the Buddha, met her and offered to negotiate with the Buddha on her behalf. 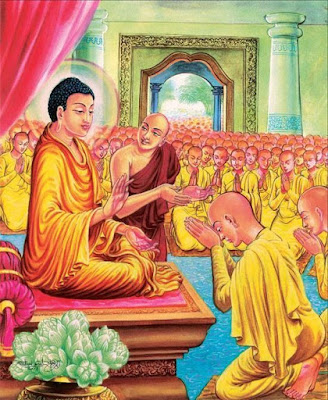 Respectfully he questioned the Buddha, "Lord, are women capable of realising the various stages of sainthood as nuns?"

"They are, Ananda," said the Buddha.

"If that is so, Lord, then it would be good if women could be ordained as nuns," said Ven. Ananda Thero, encouraged by the Buddha's reply.

"If, Ananda, Maha Pajapati Gotami would accept the Eight Conditions it would be regarded that she has been ordained already as a nun."

Theri Prajapathi Gotami agreed to accept the The Eight Garudhammas and was accorded the status of the first bhikkhuni. Subsequent women had to undergo full ordination to become nuns.

Her Spiritual Life As a Nun 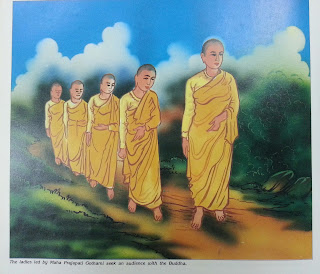 Other Bhikkhunis after listening to Nandakovada Sutta, discoursed by Arahat Nandaka attained Arahat-ship. The Lichchavi Kings built monasteries and offered them to Bhikkhunis and looked after their other needs. While residing in the city of Vaishali nunnery, she helped many women to ordain in the Sanga who searched for freedom. She gave abundant advice and support to all Bhikkhunis and after gaining adequate training, these nuns went back to other villagers and established nunneries themselves. Queen Yasodhara, Rupa Nanda and many other thousands of queens and women came to ordain under her leadership.
When the Buddha was living in Devramvehera Monastery, in Sravasti he placed Bhikkhunis in higher ranks as Female Chief Disciples of the Buddha. Theri Mahaprajapathi Gotami was placed as the Most Senior Bhikkhuni amongst other Bhikkhuni Sanga in his dispensation.

What makes her so significant is the fact that she was the first and only known woman to be directly ordained by the Buddha himself under The Eight Conditions. Her determination, courage, patience, wisdom, perseverance and clear vision coupled with her devotion to the Dhamma and the accumulated past merits in her previous lives made it possible for her dreams come true. 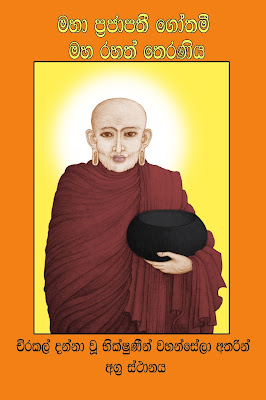 While living in Vesali, at the age of 120 years, she decided to leave this world for ever. Along with many other Bhikkhunis she came to see the Buddha who was then living in the Kutagara hall in Vesali. She said, “ Lord I became your mother when you were a child, I nourished you and brought you up and in return you gave me the sweet nectar of Nibbana.” “Lord, all women can be named as princesses and queens, but I was the only fortunate person who could be called by this uncommon name “Buddha Mata” and I gained this only because of you” She took pardon from the Buddha saluting him at his feet and requested him to give his consent to leave so that she would not return back to life any more. The Buddha gave permition and asked her to clear the doubts of the crowd and show her achievements and attainments to the ordinance by performing supernormal powers.

Arahat Prajapathi Gotami performed powerful miracles through her supernormal powers which stunned the audience. She also said goodbye to Arahat Rahula, Arahat Nanda. And Ven. Ananda and other Bhikkhus. When she left for her Vesalipura nunnery, the Buddha followed her with other Bhikkhus up to the Vihara entrance. Then Theri Prajapathi came to the Buddha and paid her last respect once more and said, “Lord this will be my last respect paid to you” and saluted him for the last time.

Mahapajapati Gotami’s major accomplishment in the Buddhist tradition was to have been the first woman to be ordained into the monastic life, as well as having reached enlightenment, Nirvana endowed with six super natural faculties and the four analytical knowledges.

Mahapajapati Gothami proved to the world that women also was capable as men to attain enlightenment, the highest known position in Buddhism. Not to mention that women were viewed as inferior beings during the time this impacting event took place. This comes to show that Mahapajapati Gotami broke that cycle, and paved the way for women to be seen as leaders or equivalents along side with equality.
Posted by Ven.Sudhamma at 10:39 AM