THE YOUNG LIFE OF PRINCESS SANGAMITTA

A speech given on the Binara Poya Day to Comomarate SangamittaTheroni's arrival to Sri Lanka, addressing the Students and Parents of the Yasodhara Sinhala & Dhamma School of the Srilankarama Mahaviharaya, Brisbane, 2012.  - Talk given by By Ven. Sudhamma. 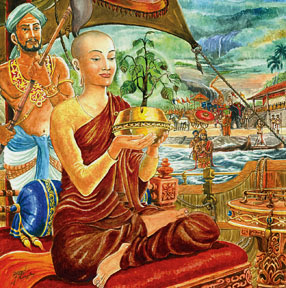 Most Venerable Nayaka Thero, Maha Sanga, Dear Devotees, Parents and Students,
I would like to give a brief description of the princess Sangamitta’s young life. I feel life stories of these Noble ones can inspire young people to learn and accomplish much in their lives.
We all know that Princess Sangamitta was the only daughter of the Emperor king Asoka and the mother of Vidisa Devi of India. She married at the age of 14 to Agibrahma, a nephew of Emperor Asoka, who was also later became an Arahat. She was ordained at the age of 18 in the Theravada Buddhism Order by their preceptor Dhammapala Theri. Her teacher was Ayupala Theri.
As the daughter of a great king, she had every opportunity to enjoy life to the fullest.
It is said that she grew up to be a very attractive girl.  Her young life is said to have been rich with feminine qualities.  She was never proud of her beauty, or her attractiveness. She never behaved in a way that could hurt anyone.  Even though she was the daughter of the Emperor of India, she never thought of herself as very important or popular since she was out of this superficial view.  Her actions and all doings were calm, serene and it appealed to all those who came to know her. Because of her calm appearance, beauty and good character she was able to impress every one, and she had a great following.


When studying she was able to perform well in all areas.  She excelled in sports and attended to them mindfully when required.  But when she needed tranquillity and peace of mind, she knew how be alone and relax.  When she wanted to enjoy things, she knew how to and organised her life style according to her needs.

From a very young age, Princess Sangamitta loved to read books.  She also loved to read the books of leading figures of great Buddhist female Nuns who brightened the Buddhist clergy.  Her favourite books were the biographies of the Great Arahanth Maha Prajapathi Gothami. Yasodara Arahat theri and The Buddha's two great disciples Arahat Khema and Uppalawanna.  Even at the age of 7 & 8, she showed great devotion and interest in spiritual life and activities. 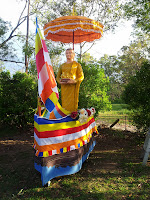 When the Princess Sangamitha was a teenager, she learnt all skills what a princess should learn.   She also learnt everything that a housewife should learn. Even though she grew up to be a very beautiful princess, she was never proud about her beauty or father's possessions.  Her modesty, simplicity, refined manners, obedience and treating everyone alike and her enthusiastic diligence in religious activities were the great qualities.

From a young age, the Princess grew up with less sensual desires and therefore, she wasn't too interested in a marriage; but as a custom at that time in India, she was given in marriage to a Prince called Aggibrahma.  They led a very happy married life and had a son called Sumana. When Buddhism was widely spreading in India, King Asoka's brother Tissa joined the order.  Then The Prince Aggibrahma, Princess Sangamitta's husband also decided to join him.  Princess Sangamitta gave her consent for him to join the monastic order, very willingly.  She also allowed her son Sumana to join the Monastic order.  Later Princess Sangamitha also became a nun and with her dedicated perseverance to    Dhamma she became an Arahat Theri within a short period of time.

Arahat Sangamitta Theri lived in Sri Lanka for, nearly fifty years supporting the nuns and improving the quality of the Sri Lankan womanhood and passed away at the age of 79 at the Hatthaloka Upasikaramaya (Nunnery) in Anuradhapura.  Many Arahat Theris, Great prominent Buddhist female devotees like Viharamahadevi, Soma Devi ,Ahelepola Kumari and many others, emerged in Sri Lanka because of  Sangamitta Theri’s  great self- sacrifice, deep religious service and upliftment of the moral, spiritual and intellectual life of the womanhood.

We are very fortunate today, that here at Sri Lankarama Mahaviharaya, in Brisbane, we are able to venerate this historic event with Venerable Maha Sanga and all our Sri Lankan families. We owe our gratitude to these great families of king Asokas and King Devanampiya Tissas, for lighting our hearts
and establishing Buddhism in our little Nation, Sri Lanka.

As Buddhists we must strive to reach the highest form of spiritual attainment and be able to realise the Four Noble Truths and tread on the Noble Path to end this life cycle. Even though we live far from our mother land, here in Australia, our young people have the fullest opportunity to hear and listen to Buddha Dhamma and also to lead a virtuous life according to the Teachings of the Buddha. Finally, I wish for all to experience this blissful state of ever- lasting happiness, Nibbana.