THE FIVE RULES OF GOOD CONDUCT


THE LAW OF KARMA 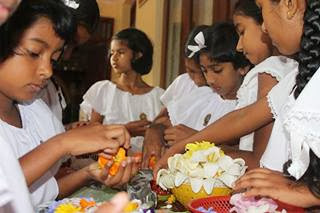 In Buddhism, according to the law of moral causation, one is responsible for one’s own actions and consequences. The law of karma is an impersonal law. It operates in its own sphere without any intervention or interference of any external force or deity or God.

The first and the second verses of the Dhammapada teaches that, If one thinks, speaks or acts in an unwholesome or unskilful manner (influenced by three unwholesome roots of greed, hatred and ignorance), unwholesome consequences or suffering follows one as the wheel of the cart follows the hooves of the ox that draws the cart.

If on the other hand, one thinks, speaks and acts in a wholesome and skilful manner, when conditioned by the absence of greed, hatred and ignorance, but over allowing with loving kindness generosity and wisdom, then the wholesome consequences or happiness follows one, just as the own shadow that never leaves one.

This is what it is meant by the law of moral causation. When a person leads a moral and wholesome way of life, by avoiding killing, stealing, sexual misconduct, lying and the indulgence of intoxicants, that person is protected from the harmful effects of such unwholesome actions.

The purpose of Buddhist moral precepts 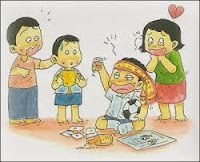 There can be no success in gaining happiness out of Buddha Dhamma until we understand the use of sila, which is morality, the Five Rules of good conduct. We cannot call ourselves true followers of Lord Buddha until we follow the five “do nots.”

As a rule, these five rules are recited after taking the three refuge and are usually considered as a necessary part of the ceremony of becoming a Buddhist. Everyone understands these rules and do know that it is good and wise to follow them all, but many persons have week characters and do not make a real attempt to be guided by these Five Rules that all Buddhists must follow.

If we violate the universal law of cause and effect (kamma) we will have to experience the bad effects sooner or later. That is why the Buddha introduced a moral code in the foam of precepts, so that we can live in harmony with existing living beings and maintain a healthy, peaceful atmosphere which will promote the well-being of all.

There are three important factors in the Buddhist teaching. The Eight Fold Path is comprised of sila, samadi and panna. These three are the important factors in the training of Buddhist practice: morality (virtues), meditation and wisdom (sila, samadi and panna). The English word morality is used to translate the Pali term sila. Morality is the stepping-stone for spiritual development. Therefore the observance of precepts serves as the preliminary groundwork for the cultivation of higher virtues or mental development. Sila or virtues is the most important step on the spiritual path. Without morality, right concentration cannot be attained, and without right concentration, wisdom cannot be fully perfected. Therefore, morality not only enhances people's ethical values and fulfills their noble status as human beings, but it is crucial to their efforts towards the highest religious goal of Nibbana. 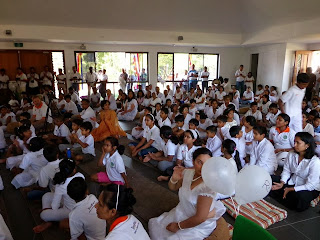 The Five Perils to one of bad Morality

“The Buddha addressed the lay followers of Pataligama, ‘House holders there are these five perils to one of bad morality, of failure of morality. What are they?’
1 .In the first place, he suffers great loss of property through neglecting his affairs.
2. In the second place, he gets a bad reputation for immorality and misconduct.
3. In the third place, whatever assembly he approaches, whether of Khattiyas, Brahmins, householders or ascetics, he does so differently and shyly.
4. In the fourth place, he dies confused.
5. In the fifth place, after death, at the breaking-up of the body, he arises in an evil state, a bad fate, in suffering and hell. These are the five perils to one of bad morality.”

The five Advantages to one of Good Morality 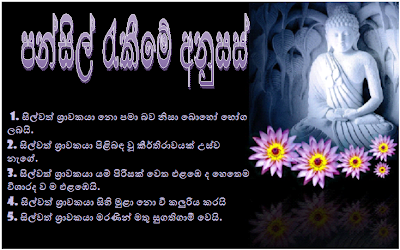 The rule against impurity tells us that we must respect our bodies and not to make improper use of them. Human beings know the difference between right and wrong and this places on us an obligation to behave ourselves in a way that is very different from animal conduct.

When you are truthful, and in doing so, one becomes trustworthy to a limitless number of people. Others can rely and begin to believe in one’s words.  No one gets to be called a liar. Further more... lying is also one of the very quickest ways to lose self-respect. Being truthful, one gains a share in limitless freedom from danger. 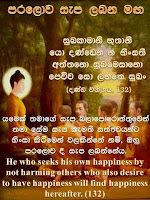 Here is an expanded version of the Five Precepts 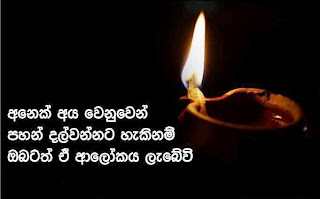 The Buddha stated that parents who really care and love their children, should help and promote them to grow and develop in virtues. Similarly children must help and promote their parents spiritual development. This is because neither of them wants to see their children nor parents suffering after death. This means, to be re- born in a lower realm or in woeful plains.

Therefore both parents and children have a moral responsibility towards their loved ones, and should promote and support each others gain in higher spiritual attainments. Moral precepts provide a wholesome foundation for personal and social growth. They are practical principles for a good life and the cultivation of virtues. Sila or virtues contribute to harmonious and peaceful coexistence among community, family members, and consequently helps to promote social growth and development. Without morality there will be corruption and disturbance and if we understand the objectives of sila and realize its benefits, we will see moral precepts as an integral part of life rather than taking it as a burden that has been forced to follow. 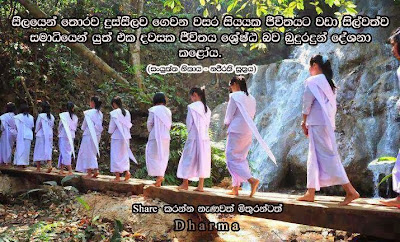