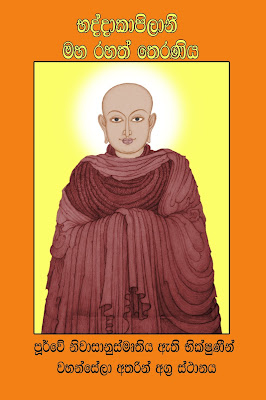 Many eons a go, during Pudumuttara Buddha's dispensation Baddakapilani was born in the city of Hansawathi and later was married to a wealthy husband called Videha. They both enjoyed a happy and comfortable life and often visited the monastery to listen to Dhamma Sermons from the Buddha.  On a certain day after the Dhamma sermon, she heard a nun proclaimed in the first rank of those who could recall former lives. She resolved to acquire a similar rank, while her husband (Mahā Kassapa in this life) resolved to be chief among those who practise austere vows (dhutangadari).

From then on she generated good acts and fulfilled virtues to her best. With this wish in mind she gave alms to the Buddha and his Sanga for 7 consecutive days and the last day, after paying respect to the Buddha, she conveyed her wish. The Buddha foreseen her future wish, knew it was going to come true, and affirmed her that it would come to life (through his ability to see future lives of others, Anawarana Gnana) during the dispensation of Gautama the Buddha.

After the Buddha Padumuttara passed away they both built a Stupa (pagoda) and enshrined Buddha's relics, and paid due respect with much devotion and gratitude to the Buddha. Together they performed many good deeds and were reborn in heaven and enjoyed heavenly pleasures for a very long time. 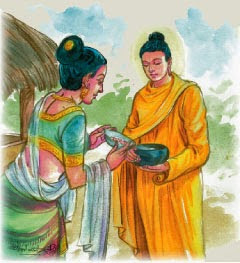 In the interval between the appearance of Konagama and Kassapa Buddha, she was born as the wife of a clansman. She had many disputes with her sister-in- law. A Pachcheca Buddha appeared at her door steps for arms food on a day they were quarreling, Her sister-in-law seen the Buddha, offered food to the Buddha with great reverence. She wished, “May I not be born close to unwise persons here after.” Seeing the sister-in-law offering food, she became very angry. She went to the Pachcheka Buddha and got his bowl back, cleared all her sister's food and filled the bowl with dirt mud and gave it back to the Buddha. The people nearby, saw this ill will and condemned her for her evil act. Feeling ashamed and guilty conscious of what occurred, she asked him forgiveness. Then she got the bowl back, emptied it, washed it well with scented powder and having filled it with the four sweet foods, sprinkled over the top ghee of the colour 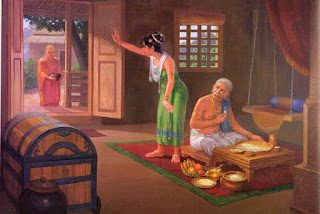 of a lotus calyx. Handing it back to the Pachcheka Buddha, she prayed to herself " As a result of this offering, I wish to have a beautiful body and complexion." The Buddha offered them merit and returned back.
Because of this merit she performed, there after she was born with beauty in every life, but a mud like repulsive odour came out from her body because of the evil act she performed to the Pachcheka Buddha.

During Kassapa Buddha's time she was born in Benaras, as the daughter of a wealthy treasure Mahadana. She was arranged to get married to the same husband and on the wedding day he refused to take her hand because of the odour that came through her body. Later she was given in marriage to other men seven times but her body gave such evil odour that she was repulsive to all and was abandoned by several husbands.
This was the result of the evil act she conducted at the Pachcheka Buddha in her previous life. But her good acts also should ripen soon.

Feeling sad she decided her ornaments made into a brick of gold and placed it on the shrine of Kasyapa Buddha, which was in process of being built. She reverenced to it with her hands full of eight lotuses and offered some sandalwood perfume to the relics chamber, at the table of offering. She wished that “may I spread the fragrance of lotus from my body and sandalwood from my mouth.”
Her body immediately became fragrant and sweet, and she was married again to her first husband. Both of them together attended to many meritorious deeds.

In a later life, she was the queen of Nanda, king of Benares with whom she ministered to five hundred Pacceka Buddhas, sons of Padumavati. The king and the queen with fellow workers took care of all requisites of the Buddhas, built dwelling places and served them with great reverence. When the Pachcheka Buddhas passed away she was greatly troubled and renounced herself up to ascetic practices. The king who arrived later, heard the sad news, saw the impermanent nature of lives and he too decided to become an ascetic. They converted Buddhas' dwellings into monasteries for monks and nuns and paved opportunities for others to join the monastic life.
Both of them attended to may meritorious deeds then and after and practised meditation attaining higher absorptions (Janas). After passing away, they were both reborn in the Brahma realm.

During Gautama Buddha's time she was born as Badda, the daughter to Kosiyagotta Brahmin of Sagala, in the Madda country.

According to Apadana her mother was Sucimati and her father was  Kapila, whence, her title of Kapilani would have come after him. The husband was born to Kosiyagotta brahmin as father and Sumanadevi as mother from the Maha Thitha Brahmana Village.
When the messengers sent by the parents of Pipphali manava (Maha Kassapa) were wandering about seeking for a wife for him to resemble the image they carried with them, they discovered Bhadda and informed Pipphali's parents. The parents arranged the marriage without the knowledge of the young people and Bhadda went to Pipphali's house. There they lived together, but, by mutual consent, the marriage was never consummated. It was said that, she brought with her, on the day of her marriage, fifty thousand cartloads of wealth.

When Pipphali desired to leave the world, making over to her his wealth, she wished to renounce it likewise, and together they left the house to become recluses unobserved by others. In the village, however, they were recognised by their people and they fell down at their feet. They granted freedom to all their slaves, and set forth, Pipphali leading and Bhadda following close behind. On coming to a fork in the road, they agreed that he should take the right and she the left.
Asetic Pippali came to a place called Bahuputtaka Chithiya where he met Buddha and received higher ordination from the Buddha (Ehi Bhikkhu Bhava). In due course Baddakapilani came to the Titthiyarama (Niganta Nunnary near Jetavana), where she dwelt for five years, because women had not gained entry into the Bhikkhuni sanga. She learnt duties of nuns and techniques of samata meditation and there she meditated and gained higher absorptions. 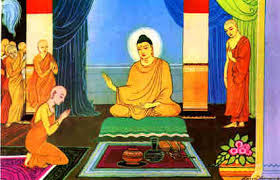 Later, when Theri Prajapathi Gotami paved the way for women to enter the Bhikkhuni order, Bhaddakapilani joined her and received ordination, attaining arahatship not long after. Her continued practise of meditation, ability to reach higher absorptions coupled with many kinds of meritorious deeds performed in her previous lives, became fruitful in order to reach her goal. She was prepared to gain complete insight.  Finally she gave up all clinging and was freed from the need ever again to be reborn and suffer, on any plane. She was successful in destroying all passions. She attained Arahaship endowed with four analytical knowledges (Patisambida Gana) and six Supernormal powers, where she had been able to recall past lives faster. (Purwenivasamurti Gana).

The Bhikkhuni Sanga was widely spreading at this time in India and Arahat Baddakapilani Theri had given meditation instructions to many nuns in order to reach the Jarnic experiences to gain into deep insights and attain enlightenment.

Later, in the assembly at Veluwana Monastery (in Sravasthi at Anatapindika's Grove,), when the Buddha placed his Chief Female disciples, the Buddha declared Arahat Baddakapilani Theri as the foremost of nuns who could recall former lives.

One day when Arahat Theri Baddakapilani spending time leisurely and peacefully, recollected the qualities of her former husband, now who is the third Great Bhikkhu in the Buddha's order, Arahat Maha Kashyapa Thero's Greatness. There she uttered these Joyous utterances (poems of the Nuns - Theri Gataha) which has been recorded in the Pali Cannon, on 'Chatukka Nipatha.”

“Son of the Buddha and his heir is he,
Great Kassapa - his mind serene, collected.
Vision of previous lives is his,
Heaven and hell he penetrates.
The ceasing of rebirth he has obtained,
And supernormal knowledge he has mastered.
With these three knowledges possessed by him
He is a brahman true, of threefold knowledge.
So has she, too, Bhadda the Kapilani, gained for herself
The threefold knowledge and has vanquished death.
Having bravely vanquished Mara and his host,
It is the last formation of a body that she bears.
Seeing the world's deep misery, we both went forth
And are now both free of cankers, with well-tamed minds.
Cooled of passions, we have found deliverance;
Cooled of passions, we have found our freedom.”
Posted by Ven.Sudhamma at 11:43 AM