THE STORY OF ARAHAT BHIKKHUNI kISAGOTAMI 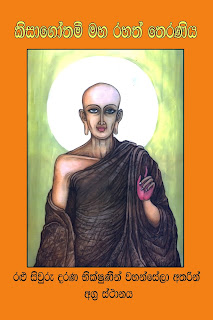 “For one who has a clinging mind and finds delight in babes and herds
Death does seize and carry away as great flood a sleeping village.”

“Men are proud that they possess children, cattle and other forms of wealth. They tend to be proud that way because their minds are overwhelmed by blemishes. Floods sweep away a sleeping village, taking along all its people and their possessions. In the same way, death comes unawares and sweeps along the people however proud of their possessions.” (Dhammapada V. 287)

While residing at the Jetavana monastery, the Buddha spoke this verse, with reference to Kissagotami, the daughter of a clansmen and the wife of a rich man from Savatti.
During the dispensation of Padumuttara Buddha, she was born in the city of Hansawathi, to a wealthy family. One day, the Buddha appointed a particular enlightened nun, among the female Maha Arahats of the Noble Sanga for the ability to wear rough robes.  Kisagotami immediately decided to follow her in her footsteps.  She gave alms, and practiced meditation. Thereafter, for many lives she was born in Deva and human realms.
During the dispensation of Kashapa Buddha, she was born as a daughter of (one of the seven daughters of Kiki ) the Clansmen Kiki, and was named Dhamma.  Along with her other sisters, She led a spiritual life, gave alms, kept away from sensual desires and was disciplined in higher virtues. 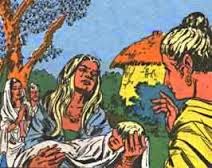 She was born in this dispensation in a poor family, to a daughter of  a clansmen. She was lean and hence called Kisa. Her own name was linked with Kisa and was known as Kisagothami. Kisagotami gradually grew to be a very attractive young woman. She was duly married to a rich man. When a son was born to her she became popular. The son died when he was very young and Kisagotami was stricken with grief. Carrying her dead son, she went everywhere asking for medicine to restore her son to life. People thought she had gone mad. But a wise man seeing her sorrowful condition, decided to send her to the Buddha.

He advised her: "Sister, the Buddha is the person you should approach. He has the medicine you want. Go to him." Then she went to the Buddha and asked him to give her the medicine that would restore her dead son to life. The Buddha told her to get some mustard seeds from a home where there had been no death.
Overjoyed at the prospect of having her son restored to life, Kisagotami ran from house to house, begging for some mustard seeds. Everyone was willing to help but she could not find a single home where death had not occurred. The people were only too willing to part with their mustard seeds, but they could not claim to have not lost a dear one in death. As the day dragged on, she realised hers was not the only family that had faced death and that there were more people dead than living. The truth gradually dawned on her about the universality of death.  As soon as she realised this, her attitude towards her dead son changed; she was no longer attached to the dead body of her son. She quickly took the corpse to the cemetery and kept it there. She realised how simply the Buddha had taught her a most important lesson: that everything that is born must eventually die. 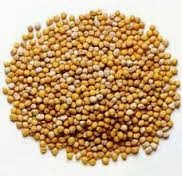 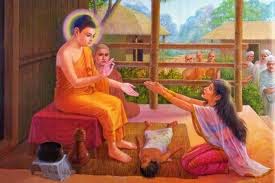 She buried her dead son and told the Buddha that she could find no family where death had not occurred. Then the Buddha said: "Gotami, you should not think that you are the only one who has lost a son. As you have now realised, death comes to all beings. Before their desires are satiated death takes them away."

She begged the great physician to minister to her mind’s disease. The Buddha’s diagnosis was incomparable. The Buddha preached. There are four powerful currents or floods (oga) that would hurl mortals to and from in the ocean of samsara. Floods is a name for the four cankers (asava). 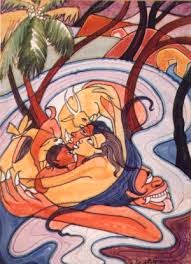 Kisagothami's practice of meditation in the past came to her rescue. It was not difficult for her to realise that nothing stays for ever. It was in all planes of life, including Brahma World. Only an Arahat passes away completely never to be born again or to die again. She glimpsed that bliss. Her great paramis enabled her to understand impermanence so thoroughly that soon after words the Buddha confirmed her attainment of stream-entry.

She then spoke these lines:
“No village law is this, no city law,
No law for this clan, or for that alone;
For the whole world- and for the gods too,
This is the law: all is impermanent.”

In Perceiving the fleeting nature and impermanency of life, Kisagotami decided to renounce the worldly life. She requested the Enlightened One to admit her to the Order of Bhikkhunis. Accordingly, the Buddha sent her to the community of nuns where she was admitted as Bhikkhuni Kisagotami. 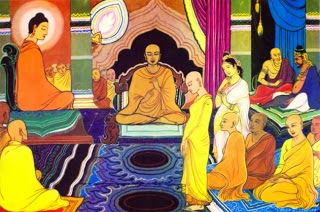 She was hardworking and always mindful and conscientious of her religious duties, and strove diligently for her spiritual development to purify her mind of all mental defilements.

One night, she lighted some oil lamps and sat down a short distance away. Then she started looking at the flames. She noticed while some flames flared up, others flickered out. With her mind concentrating on the flames, she meditated as follows: "Even as it is with these flames, so also is it with living beings in this world: Some flare up, while others flicker out; only those who have attained Nibbana are no longer seen." 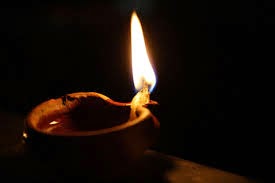 The Buddha through his super normal power saw Kisa Gotami from the Jetavana Monastery. He sent forth his radiance and exhorted her to continue meditating on the impermanent nature of all component things. The Buddha also commented: "One who lives a hundred years without perceiving the Deathless State; a life of one day is better if one has perceived the Deathless State." (Dhammapada 114)

After the discourse, Kisagotami attained Arahanthood. Arahat Therie Kisagothami was foremost among the female Maha Arahats of the Noble Sanga, for the ability to wear rough robes. 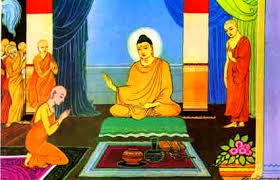 The ultimate goal of a Buddhist is to have complete control over his/her own life so that the mind does not flutter and impacted by the ups and downs during the eight worldly contingencies (the state of equanimity or upeksha stated in the Brahma Vihara, the Four Abiding States of the mind)). The worldly contingencies are ; gain- loss, honour - dishonour, blame-praise, happiness and sorrow.

“I've gotten past the killing of [my] sons,
Have made that the end
To [my search for] men.
I don't grieve,
I don't weep....
It's everywhere destroyed — delights.
The mass of darkness is shattered.
Having defeated the army of death,
Free of fermentation I dwell.” (Cited from-"Wikipedia The free encyclopedia").

Addressing Mara as "friend," she shows her lack of fear and her equanimity. Grumbling sullenly, Mara disappeared just as before when he had tried in vain to fetter other nuns to the realm of birth and death.
The nun Kisagotami, rising to holiness from lowliest birth, was praised by the Buddha as amongst the seventy-five greatest nuns.