A written and detailed exposition of the Dhamma Talk given at the UQ Buddhist Chaplaincy to the University students on the 7th, August 2017. 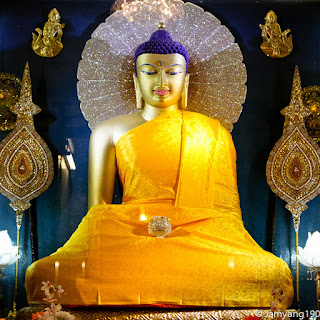 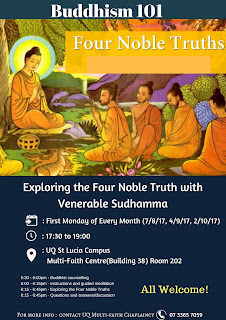 Ascetic Siddhartha Gautama, after training the period of austerities for six years realized that: “By this racking practice of austerities I have not gained any super human states, any distinction in knowledge and vision worthy of the noble ones. Could there be another path to Enlightenment (Mahasaccaka Sutta).” He walked to Bodh Gaya, on the day before the Vesak full moon day, where he sat himself beneath the Bodhi Tree in the meditation posture and vowed not to rise from meditation until he had attained perfect enlightenment. There he had eaten solid food and regained his strength, energy back and was quite secluded from sensual pleasures and secluded from unwholesome states.

“ There he recalled an earlier incident, living with the Sakyans under the cool shade of a, rose apple tree, a state he was quite secluded from sensual pleasures, secluded from unwholesome states, I entered upon and abided in the first Jana, which is accompanied by applied and sustained thought, with rapture and pleasure born of seclusion. Could that be the path to enlightenment?’ Then following on that memory came the realisation: That is indeed the path to enlightenment (Mahasaccaka Sutta, MN).” 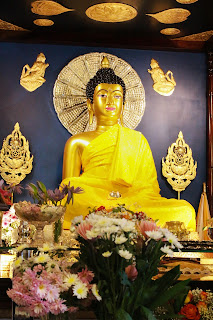 Before the setting of the sun, he had overcome the force of mara; in the first watch (6:00- 10pm), started seen his previous states of existence: “such was so named, of such a clan, with such an appearance, such was my nutriment, such my experience of pleasure and pain, such my life term; and passing away from there, I appeared here. Thus with their aspects and particulars, I recollected my manifolded past lives (Bhayabherava Sutta MN).”

In the middle watch (10:00pm-2:00am), acquired supernormal vision, “Thus with divine eye, which is purified and surpasses the human, I saw beings passing a way and reappearing, inferior and superior, fair and ugly, fortune and in fortune, and I understood how beings pass on according to their actions Bayabherava Sutta MN). In the last watch (2:00am- 4:00am), I directed it to knowledge of the destruction of the taints.”

The Buddha understood the four Noble Truth “When I knew and saw thus, my mind was liberated from the taint of sensual desire, from the taint of being, from the taint of ignorance. When it was liberated, there came the knowledge: It is liberated, I directly knew: Birth is destroyed, the holey life had been lived, what had to be done has been done, there is no more coming to any state of being (Bayabherava Sutta, MN).” Thus it was clear the Buddha was focusing his thoughts on Dependent Origination and at sun rise he obtained complete enlightenment. 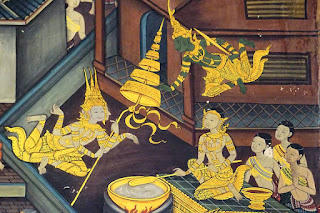 Knowledge
The term vidhya is being used in contrast to avidya, ignorance or the lack of knowledge, which binds us to samsara. The Mahasaccaka Sutta describes the three knowledges which the Buddha attained:
1. Insight into his past lives
2. Insight into the workings of Karma and countless Rebirths of his and others through divine eye
3. Insight into the Four Noble Truths

The Buddha says this dependent arising is deep in truth and deep in appearance. It is through not understanding and not penetrating this truth of dependent arising that living beings have become entangled like a matted ball of thread, or have to become like grass and rushes, unable to pass beyond the woeful states of existence, unable to escape from samsara, the cycle of becoming. Thus dependent arising is not only the content of the Buddha's enlightenment, not only a philosophical doctrine, but it is also the truth that has to be realized to gain liberation from suffering. So this is the key not only to the intellectual understanding of the Dhamma, but to the attainment of liberation itself.” 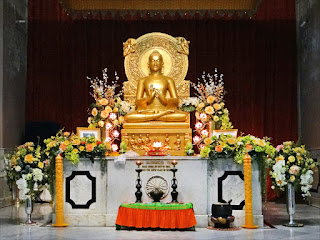 The Dhammachacca Pawatwana Sutta – (Setting the wheel of Dhamma in Motion (MN)
It was first delivered to the Five Ascetics, most former colleagues of the Buddha, at the Deer Park in Isipathana, near Benares on the Esala Full Moon Day, two months after his Enlightenment.

He addressed the first five Bhikkhus as follows:

There are two extremes which should be avoided by recluse

1.  The constant attachment to sensual pleasures which is vulgar, worldly, ignoble and profitless.

2.  Constant addiction to self-mortification which is painful, ignoble and profitless.

The Buddha realised the facts regarding the Four Noble Truths, namely:

The 1 First Noble Truth Dukka – Suffering/un-satisfactoriness
"Now this, monks, is the Noble Truth of birth is dukkha, ageing is dukkha, death is dukkha, sorrow, lamentation, pain, grief, & despair are dukkha; association with the unpleasant is dukkha; separation from the loved is dukkha; not getting what is wanted is dukkha. In short, the five clinging-aggregates are dukkha (SN)."

The first Noble Truth contains the ordinary meaning of suffering. It also includes deeper ideas such as, un-satisfactoryness, imperfection, impermanence, emptiness, insubstantially etc.
Here the Buddha does not deny happiness in life, when he says there is suffering. He admitted all forms of happiness, both material and spiritual, for lay men & women as well as monks and nuns.

3. The third form of dukka as conditioned states (samkara dukka) is the most important philosophical aspect of the 1st Noble Truth.

In Buddhism, man or woman is a living creature that has come into being as a result of his/her actions and un-quenched desires as a combination of physical and mental constituents.
It need an analytical explanation of what we consider as a “being” as an individual or as I. They are a combination of ever changing physical and mental forces or energies, which may be divided into five groups or aggregates.

Five Aggregates: The purpose of this analysis is to create the wisdom of non- self
1.  Rupa – Matter or Foam
Five aggregate of matter are included in the four great essentials:
Solidity or earth, fluidity or water, air and heat
2.  Feelings: pleasant, unpleasant and neutral (aggregates of sensations)
3.  Perceptions: cognising objects with contact
4.  Mental formations: Included in all volitional activities both good and bad (karma). “It is volition that I call Karma.” said the Buddha.
5.  Consciousness: awareness of the presence of an object. Consciousness arises out of conditions. There is no arising of consciousness without conditions.

A being or an individual or I is only a convenient name or a label given to the combination of these five groups. They are all impermanent, all consistently changing. Whatever is impermanent is dukka. In brief the five aggregates of attachment are dukka.

“ Oh Brahman it is just like a mountain river, flowing far and swift, taking everything along with it, there is no moment, no instant no second when it stops flowing, but it goes on flowing and continuing. So Bramana is human life, like a mountain river. The world is in continues flux and is impermanent (the Buddha).”
One thing disappears, conditioning the appearance of the next in a series of cause and effect.  The five aggregate which we called namely is the idea of a self.

2. The Second Noble Truth of the Cause of Suffering
It is the craving which produces rebirth, accompanied by passionate clinging, welcoming this and that. The dissatisfaction arise not because of the things that arise out there. But because of our mental state that we suffer. The cause of suffering comes from three main saucers, our mental craving, hatred and ignorance. It is the craving that produces renewal of being accompanied by enjoyment and lust, enjoying this and that.

In Pali the word used is “Tanha” means “thrust.” All cravings lead to dissatisfaction or suffering. Each one of us are caught up in this craving and we can’t see it until we come to realise that every conditioned thing is unreliable and impermanent. This is because our desires don’t match with reality.

3. Noble Truth of the Cessation of Suffering
It is the complete separation of and destruction of this very craving, renunciation, the liberation and non-attachment. Suffering can be given up by relinquishing and letting go of our craving. 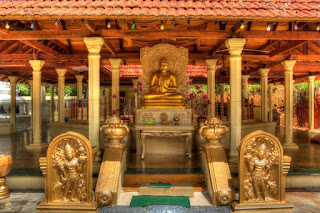 “And there arose in me the knowledge and insight Unshakable is the deliverance of my mind, this is my last birth, now there is no more rebirth.”

The absolute true intuitive knowledge regarding these four noble truths and their three Aspects and 12 modes became perfectly clear to me.

The Buddha was realistic and objective with regard to life and enjoyment of sense pleasures:
One should clearly understand three things and reflect on these three modes often:

We can always reflect on the teachings of the Four Noble Truths into our day to day life. We can be watchful of how attachment  clinging, and greed cause sadness in us. How do they arise and disappear? They arise due to attachment and clinging. We can watch how these conditions arise and when freed, how much relief can we gain from letting go of them. We can watch how causes and conditions affect our mind. We can observe the way leading to the cessation of this dissatisfaction in life, and realise that treading the Eight Fold Noble Path can ease a lot of pain and suffering.

If we can understand this reality of nature, letting go of this being, ego or I, even to a limited extent, as students, we can be careful and skillful in all our actions performed through our body speech and mind. Treading the Noble Eight Fold Path is the path leading to peace and happiness. We should determine not to get over indulged in unnecessary worldly pleasures and be mindful of our livelihood. Meditation is practiced to purify our mind, gain peace and to perform our duties and studies mindfully. It will help us to get rid of our anxieties and stress and is the only way to end all defilement s.

In our next session we will discuss about the Eight Fold Noble Path. 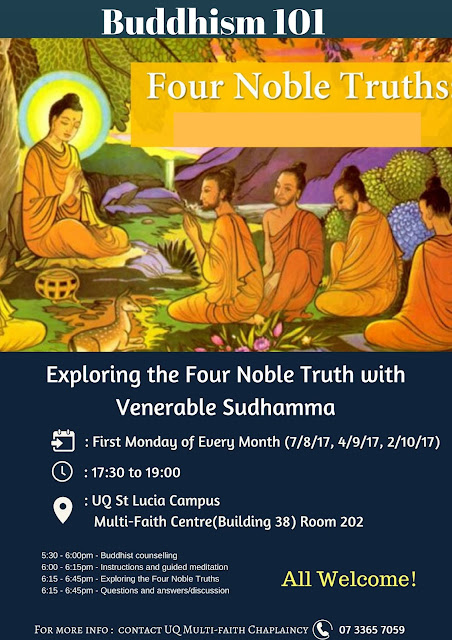 NOTE:
A truth seeker attains this stage through seven stages in consequence. This progress is characterized as Sapta Visuddhiya. “The Seven Stages of Purification.”