REFLECTION OF THE BUDDHA QUALITIES 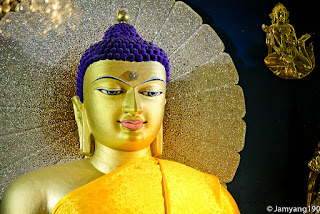 subsides.
happiness arise.
lust is eliminated.
vitakka and vichara are inclined to the Buddha qualities.
that enables attainment of neighborhood absorptions
to arise.
The only thing to do in order to know the Buddha
qualities is be virtuous. The more virtuous and
generous one is, the more one can know the Buddha
qualities.
One stream enterer (sotapanna) has more knowledge
of the Buddha qualities than that of a mundane people
put together.

Calming of the mind which is dissipated on pleasant and unpleasant
objects.


Always lives in happiness and joy.


Is able to tolerate big and small fears


Feels as one is living with the Buddha


One’s body , be filled and replaced with Buddha qualities, one receives reverence and hospitality


Mind does not bend towards unwholesome actions and moral shame and moral fear arise in one.


As a result unwholesome thoughts vanishes


Misfortunes and dangers from non human beings will subsidise


Difficulty to sleep and unpleasant frightful dreams will not occur

If you are subject to ridicule, humiliation, blame, repugnance, jealousy and intolerance of one of the


many, start practicing Buddha Qualities at once. Very


soon you will be at the receiving end of reverence,


gifts and hospitality. You will become agreeable to


everybody. You will be happy.

The Buddha was residing in the Pavarika Mango Grove in the city of Nalanda
Sariputta Maha Thero, fore most among the learned disciples, having

attained to the attainment of fruition(palasamapatti) and emerging from

there began to reflect his own qualities.
Starting from his own virtuous qualities he recollected systematically:

Samadi (concentration – stillness)
Panna (Knowledge)
Vimukthi – (freedom)
Vimukthi gnanadarshana  - (wisdom of freedom)
Attainments of 1st absorption up to the
Nevesannanasannayatanaya
Vipassana Nana (insight Knowledges)
Dibbachakku Nana (ability to see distant and very small
objects)
The four Paths from Sotapatti Magga etc: The same four
Fruits and the Four Analytical Knowledge
The Savaka Parami Gana and multitude of his qualities
tarting from the resolution made at the Anomadassi
Buddha one assankheyya and one hundred thousand
aeons before, up to the present time where he is
seated.
He reflected again and again, yet he was unable to
estimate definitely how many or how much his qualities
were.

Sariputta Maha Thero the most wisest of the desciple came to a conclution
that:
Just as the water in the ocean directly opposite a finger pointed at it is

minute, while remaining water is wast,
Just as the space opposite the finger directed at the sky is extremely little

compared to the remaining vastness of space, So also Buddha qualities

unseen even by the Sariputta Maha Thero is very vast indeed.
Therefore the commentary says:

“ If the Buddha, from day of his
enlightenment, without engaging in any other
work, day and night were to describe without
stopping through out his life span vast
multitude of qualities, then his life span
would be over, but yet the recitation of the
Buddha qualities would not”
(D.N: Sampasadaniya Sutta).

There are altogether nine important qualities of the
Buddha. In Pali, the nine qualities are:
1. Araham,
2. Samma-sambuddho,
3. Vijjacarana-sampanno,
4. Sugato,
5. Lokavidu,
6. Anuttaro-purisa-dhammasarathi,
7. Sattha-deva- manussanam,
8. Buddho and
9. Bhargava.
The qualities of the Buddha are infinite and all those infinite
qualities are included in these nine.
These qualities are also explained in Dadgagga Sutta and in
many other places in the Pali cannon.

The Nine Great Qualities of the Buddha or The
Nine fold Virtues of the Buddha
1.The Supreme Buddha, was capable of doing supernatural things like
walking in the sky, pacing on water, penetrating through hard
materials like earth, move to any place invincibly, and more. He thus
obtained the wisdom of supernatural powers (Irdhivida Gnanaya)
with infinite powers.
2. He also acquired ‘divine eye’ or the “Dibba Chakkhu Gnanaya” that
enables Him to see things at any distance without any disturbance.
He acquired ‘divine ears’ or the “Dibba Sota Gnanaya” that enables
Him to listen to any sound at any distance without any disturbance
3. He acquired an extraordinary wisdom or the “Cheeto Pareeya
Gnananaya” that enables Him to see through minds of any human or
deity.
4. He acquired the wisdom or the Pubbe Niwasanussati Gnanaya” that
enables Him to see the pathway taken by any being in Samara.
5. He acquired the wisdom or “Chutupapata Gnanaya” that enables Him
to see how beings die and leave their present lives according to their
actions (Karma) and how they be born according to their actions
(Karma).
6. The Supreme Buddha also obtained a tremendous wisdom that
enables Him to identify the state of a mind acquired by eradicating all
defilements. It is His wisdom of eradication of defilements or the
“Asavakkhaya Gnanaya”.
7. Thus, He had superb and infinite virtue (Seela), contemplation
(Samadi), wisdom (Panna), freedom (Vimukti), and wisdom of freedom
(Vimukti Gnanadarshana).
8. Because of these great qualities, my great teacher, the Supreme
Buddha, is known as Vijjacharana Sampanna… Vijjacharana
Sampanna… Vijjacharana Sampanna…

all
Posted by Ven.Sudhamma at 1:34 PM