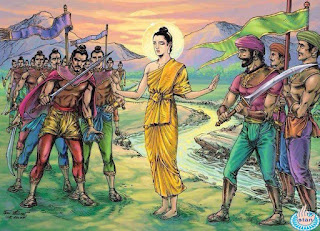 Among Those Who Hate, We Live Without Hating

The story of the Pacification of the relatives of the Buddha

The Buddha spoke this verse in the country of Sakyan with reference to the relatives who were quarrying over the use of the waters of the Rohini River.

The story goes that the Sakyans and Koliyans caused the water of the River Rohini to be confined by a single dam between the city of Kapilawattu and the city of Koliya, and cultivated the fields on both sides of the river. One year, they did not have enough rain and finding that the paddy and other crops were beginning to shrivel up, cultivators on both sides wanted to divert the water from the Rohini River to their own fields.

The residents of the city of Koliyans said, “If this water is diverted to both sides of the river, there will not be enough both for you and for us too. But our crops will ripen with a single watering. Therefore let us have the water.”

The Sakyans replied, “After you have filled your storehouses, we shall not have the heart to take gold and emeralds and pennies, and baskets and sacks in our hands, go from house to house seeking favours at your hands. Our crops also will ripen with a single watering. Therefore let us have this water.” “We will not give it to you.”  “Neither will we give it to you.”

Both sides wanted the water for their own use only and there was much ill will between them due to abusive language and accusations on both sides.  Finally one arose and stuck another blow. The other returned the blow and a general fight ensured by making matters worse.  The quarrel that started between the cultivators came to the ears of the ministers concerned, and they reported the matter to their respective rulers, and both sides prepared to go to war.
As the Buddha surveyed the world at dawn and be held his kinsmen, he thought to himself, “If I refrain from going to them, these men will destroy each other. It is clearly my duty to go for them.”
Then all alone, he went to them by going through the sky, and stopped immediately above the middle of the river. His relatives seeing him, powerfully and yet peacefully sitting above them in the sky, hid aside all their weapons and paid obeisance to the Buddha. 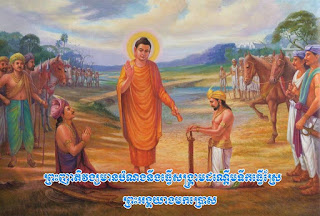 They were silent. Then The Buddha addressed them and said, “Great King why did you act in this manner? If I had not stopped you today, your blood would have been flowing like a river by now. You have acted in a most unbecoming manner.
“You live in enmity, indulging in the five kinds of hatred. I live free from hatred. You live afflicted with the sickness of the evil passions. I live free from disease. I live free from the eager pursuit of anything.”

“You live hating your enemies, but I have none to hate; you are ailing with moral defilements, but I am free from them; you are striving to have sensual pleasures, but I do not strive for them."
‘Among those who are sick, afflicted by defilements, we who are not so afflicted, live happily. Among the sick we live, unaffiliated, in extreme happiness.” (Verse 198)

At the end of the discourse many people attained Sotapatti Fruition.

(The Buddha was born as Prince Siddhartha, the son of King Suddhodana, a Sakyan ruler. The Buddha’s intimate relatives were closely linked with the Buddhist sanga. Princess Yasodhara, was a cousin of his Who was the daughter of King Suprabuddha who reigned over the Koliya race).
Posted by Ven.Sudhamma at 2:14 PM