THE PAST STORY OF THE ARAHAT DHAMMADINNA BHIKKHUNI


Arahat Bhikkhuni Dhammadinna, the fore most in expounding the Dhamma among the female disciples of the Buddha 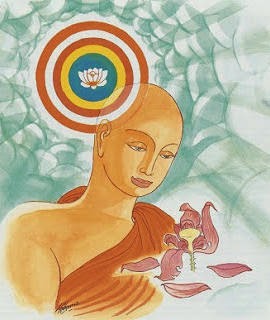 “Possessing none in time or place, grasping at none anywhere, him I call a Brahmin True.”

During the period of Pumatura Buddha
many aeons a go, Bhikkhuni Dhammadinna
was born as a house maid. Even though she was born to a poor family, she along with her husband, managed to give alms to the Buddha and his disciples quite often.

After many aeons ago, during the period of Padumuttara Buddha, Bhikkhuni Dhammadinna was again re born as a housemaid in the city of Hansawathie. She used to listen to sermons of the Buddha and she accompanied her mistress very often to the Monastery. One day she saw a Bhikkhuni being elevated to the rank of the best preacher. She felt very happy and desired to achieve the prestigious title as an enlightened Bhikkhuni, in the distant future. The maid offered food to the Buddha and his disciples very often. One day she offered alms to the chief disciple of the Buddha, Arahat Sujatha Thero, who has just come out of the ecstasy of Niroda - Samapatthi (a state of ‘no mind,’ for the intended period).” 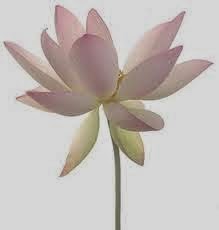 After finding out that she has inherited such good qualities, her mistress became very pleased about her and proposed her son in marriage. She became her daughter in-law. Now that she was well off with money, she realised that she could earn much merit, through the offerings, to the Buddha and his disciples. One day she invited Buddha and his disciples to her house. There she wished herself to become the best Bhikkhuni Preacher to a Buddha in the distance future. The Buddha realising and seeing this told her that her wish would come true during the dispensation of the Gautama Buddha. She also had made and offered a kuti/dwelling to the chief disciple Sanga, Arahat Sujatha.  Due to the meritorious acts she performed during several "Buddha periods," she was able to join the Bhikkhuni Order in the Gautama Buddha’s time, so to end the cycle of birth and suffering. 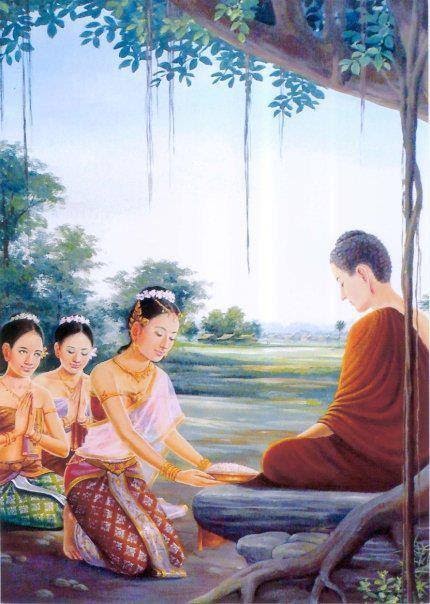 During Gautama Buddha’s dispensation, she was born as a pretty princess and figured herself as the wife of Prince Visaka the treasure at Rajagaha. Visaka was a friend of Bimbisara; the King devoted to the Buddha, One day Visaka visited the Buddha in the company of King Bimbisara. He listened to a sermon and became a saint, a “Stream – Enterer” (Sotapanna).  Later he attained the fruit of the second path, Once- Returner,(Sakudagami), and the third path “Non- Returner,(Anagami)” On his return, he was a different individual. Strange did he appear to his wife. She inquired for the reasons. Then he confessed that his mind has under gone a transformation to something “rich and strange.”

When Dhammadinna worshipped Visakha and asked him "Can women listen to the Buddha and attain this state. Prince Visakha said, "You too can achieve it." Then Dhammadinna replied "O Prince, in that case, I wish to enter the Order of the Bhikkhunis and join the Bhikkhuni Order. Visaka could not but consent. She was sent in a golden palanquin.  And with rich offerings he escorted her to the nuns’ convent and had her admitted to the Sanga.

After she has made her full profession she was known as the nun Dhammadinna. She felt that that if she were to be unsuccessful in the life of Bikkhuni then her purpose of joining the Noble Sanga was in vain. Dhammadinna repaired to a solitary place accompanied by the nuns to the country and strove hard to obtain the fruit of Arahatship.  Her past resolution with good karma had the desired effect. In no long time, she attained Arahatship together with supernatural faculties. 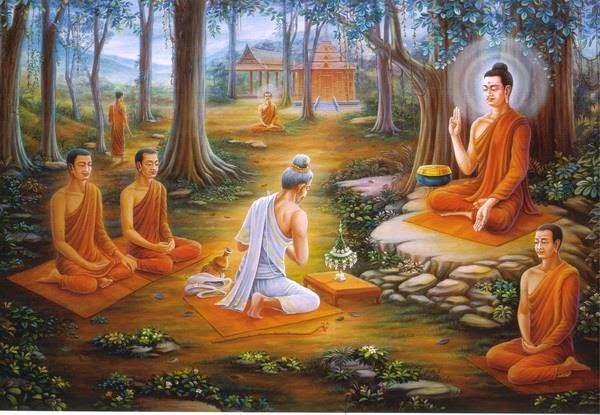 As such she visited the home town of Rajagaha so that she could be of service to her fellow creatures who knew her. When the lay disciple Visaka heard that she had returned, he thought to himself, “What can be her reason for returning?” He thought that her mission was a failure and that she was returning empty handed. And going to the Nuns’ convent and seeing the nun his former wife, he saluted her and seated himself respectfully on one side. Thought he, “It would be highly improper for me to ask her, ‘Noble Sister are you discontented?’ I will therefore ask these questions.”  And he asked a question about the path of conversion, and she immediately answered it correctly. Finally he asked about Nibbana, Arahatship.

“Wonderful brother Visaka!” exclaimed Dhammadinna.”But if you desire to know about Arahatship, you should approach the Buddha and ask him this question.” Here he was out of his depth. He was not so advanced. So she referred him to the Buddha. Visaka saluted the nun his former wife, and rising from his seat and going to the Buddha told the Buddha about their talk and conversation. Said the Buddha, “What my daughter Dhammadinna said was well said. In answering this question I also should answer it as follows,” Then he gave the stanza.

“For him, nothing no blemish remains from the past, present, or the future. He has no defilements. He has no clinging or grasping. That person, I describe as a Brahmana.” 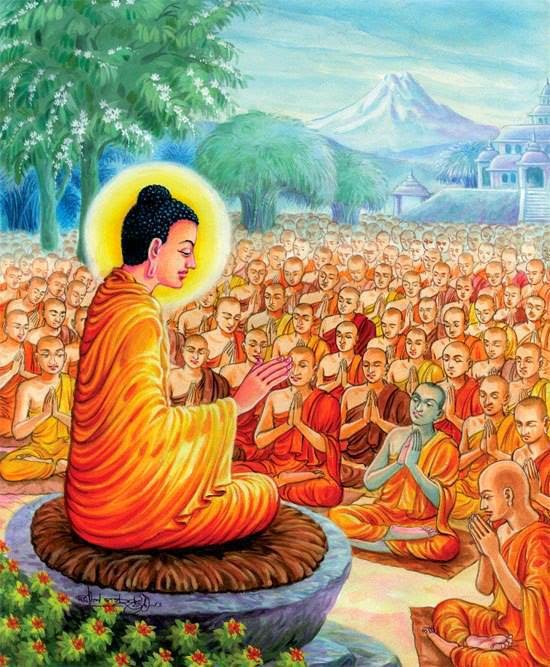 The Enlightened One, praised Bhikkhuni Dhammadinna stating that she is wise, efficient, proficient and excellent in doctrinal knowledge. The Buddha praised her Sermon Cullavedalla.

Not long afterwards the Buddha addressing the monks and laity declared that Venerable Dhammadinna was undoubtedly the foremost in expounding the Dhamma among the female disciples of the Noble Sanga.

Please follow this link below in order to read the Questions and Answers of the Arahat Dhammadinna Theri and the Great Upasaka Visaka, of the Chullavedalla Sutta from the "Majjima Nikaya."