HAPPINESS TRANQULISES - THE STORY OF A YOUNG BRIDE 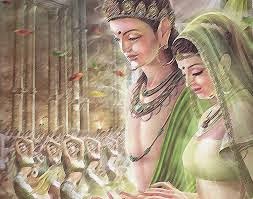 While residing at the Jetavana Monastery, the Buddha spoke this verse at the house of a lay- disciple, with reference to a young bride.
One day a young woman was to be wedded to a young man, the parents of the bride invited the Buddha and eighty of his disciples for alms-food. Seeing the girl as she moved about the house helping with the offering of alms-food the bridegroom was very much excited and he could hardly attend to the needs of the Buddha and the other monks. The Buddha knew exactly how the young bridegroom was feeling and also that time was ripe for both the bride and the bride-groom to attain sotapatti fruition.

“Oh young man, there is no fire like the fire of passion; there is no ill like burden of the five aggregates of existence (skhandhas); there is no bliss like Nibbana,” 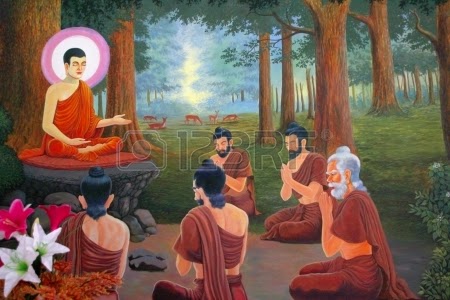 While residing at the Jetawana Monastery,the Buddha spoke the following verse, regarding the achievement of the fruit of stream entry, with reference to Kala, son of Anatapindika the well renounced rich man of Savasthi,

“The achievement of the fruit of stream – winning is the primary stage in the attainment of spiritual success. That state is greater than being a universal monarch, or reaching heaven.”

The story of “Kala”  is on the following link:
http://dhamma-stream.blogspot.com.au/2013/11/being-stream-winner-is-supreme.html

During the Buddha’s time amongst the laity, there were many men and women who were distinguished for their piety, generosity, devotion, learning and loving-kindness. Many were stream enterers and led virtuous family lives. Visaka, Queen Mallika, Uttara, Suppiya, Samawati, Nakulamata, Nandamata, Khujjuttra and Upasakas like Chitta the house holder, Anatapindika and Sumana and Subhadda the two sisters were some of the known.

Let us examine the depth of the Dhammapada, preached by the Buddha to these two young lay disciples;

What am I?
According to the commentary, the meaning of the third line of the stanza, in the Dhammapada, “khandhasamadukkha natthi” is explained as; “No pain like physical being.” They can be named as; the five groups of existence or groups of clinging (Upadanakkhandha); alternative renderings: aggregates, categories of clinging’s objects as well. 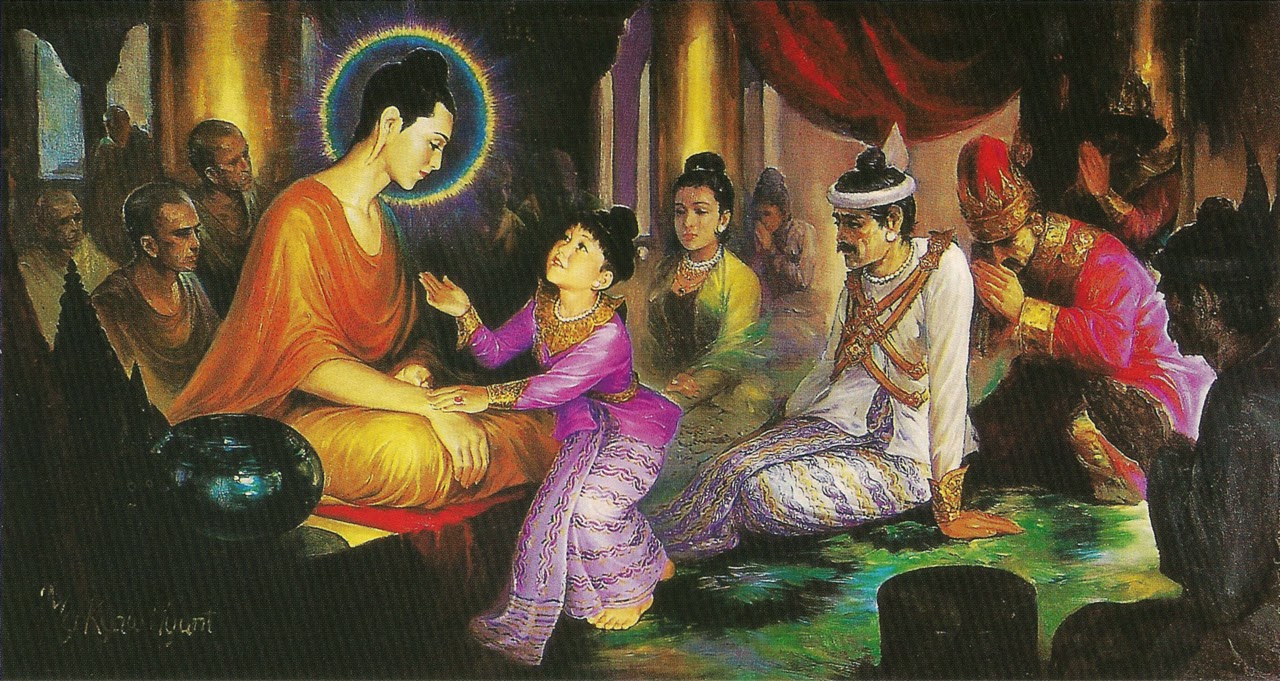 These are the five aspects in which the Buddha has summed up all the physical and mental phenomena of existence, and which appear to the ignorant man as his ego, or personality, to wit as illusion.

Skhandha
Khandha: [Sk. skandha] [Pali khandha] meaning: bulk, massiveness (gross) substance. In some places they are classified as bulk or groups, heaps, but they never exist as such and they have varying natures, combinations and have no real existence.
In Buddhist phenomenology and serology, the five skandhas (Sanskrit) or khandhas (Pāli) are five "aggregates" which categorize all individual experience, among which there is no "self" to be found. A "person" is made up of these five aggregates and the suffering arises when one identifies with or otherwise clings to an aggregate; hence, suffering is extinguished by relinquishing attachments to aggregates.

Bhikkhu Thanissaro explains khandhas  “In Five Piles of Bricks,” as follows:
“At times feeling finite, at other times infinite, whatever shape it takes it's always unstable and insecure, for the khandhas providing its food are simply activities and functions, inconstant and insubstantial. In the words of the canon, the khandhas are like foam, like a mirage, like the bubbles formed when rain falls on water (SN 22.95). They're heavy only because the iron grip of trying to cling to them is burdensome. As long as we're addicted to passion and delight for these activities — as long as we cling to them — we're bound to suffer.” ("Five Piles of Bricks: The Khandhas as Burden & Path", by Thanissaro Bhikkhu. Access to Insight (Legacy Edition), 5 June 2010,”) http://www.accesstoinsight.org/lib/authors/thanissaro/khandha.html . 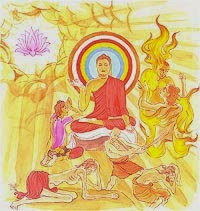 Skhandha analysed in Dhammasangani describes the concept, skhandha as: “Whatever there exists of corporeal or physical things, whether past, present or future, one’s own or external, gross or subtle, lofty or low, far or near, all that belongs the corporeality group. Whatever that exists of feeling- of perceptions- of mental formations- of consciousness- all that belongs to the consciousness group,” are called skhandha. Another way has been analysed into two groups as mind and corporeality or body (nama-rupa).”
[For a detailed explanation please refer to Khandha Suttra: "Khandha Sutta: Aggregates" (SN 22.48), translated from the Pali by Thanissaro Bhikkhu. Access to Insight (Legacy Edition), 30 November 2013, http://www.accesstoinsight.org/tipitaka/sn/sn22/sn22.048.than.html.].

The Dhammasangani shows another division as to all phenomena are treated by way of three groups what is called individual existence in reality, nothing but a mere process of those mental and physical phenomena, a process that since time immemorial has been going on, and that also after death will still continue for unthinkably long periods of time.
These five groups, however, neither singly nor collectively constitute any self-dependent real ego-entity, or personality (atta), nor is there to be found any such entity apart from them. Therefore the belief in such an ego-entity or personality, as real in the ultimate sense, proves a mere illusion.
The Buddha explained that these five complete groups have no real existence, since only single representatives of these groups, mostly variable, can arise with any state of consciousness. For example, with one and the same unit of consciousness. 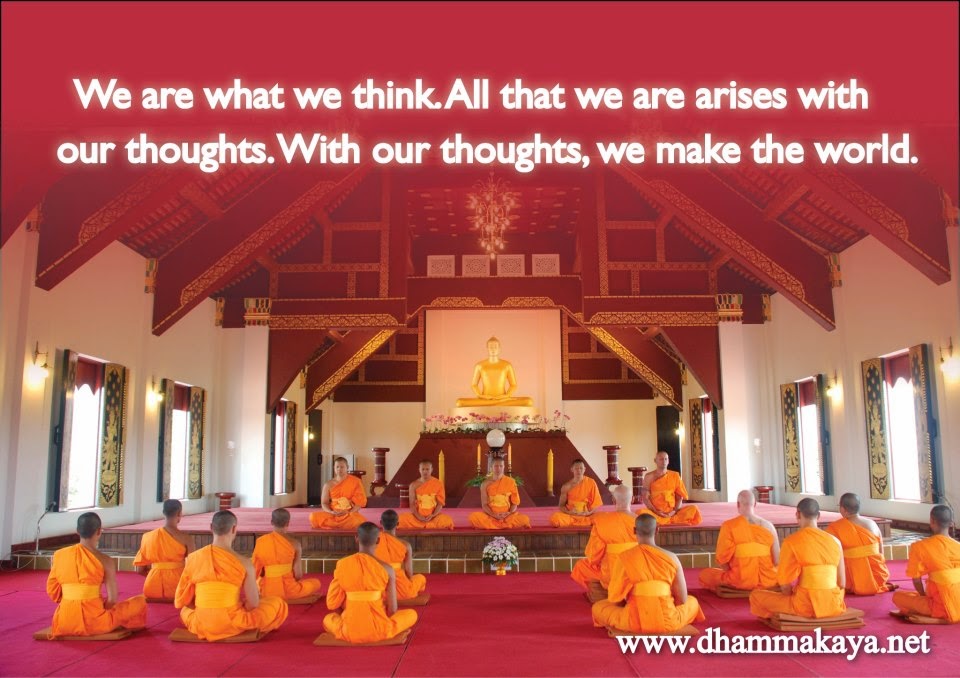 According to Dhammasangani, consciousness can arise only with one single kind of fleeing, say joy or sorrow; can be associated, and never more than one. Similarly, two different perceptions cannot arise at the same moment. Also of the various kinds of sense-cognition or consciousness, only one of them can be present at a time. For example, seeing, hearing or inner consciousness. Of the fifty mental formations, however, a smaller or larger number are always associated with every state of consciousness.
The following excerpt from the “Sammaditti Sutta,” explains how  the Buddha showed the way leading to the cessation of mentality-materiality and how to make an end to suffering: 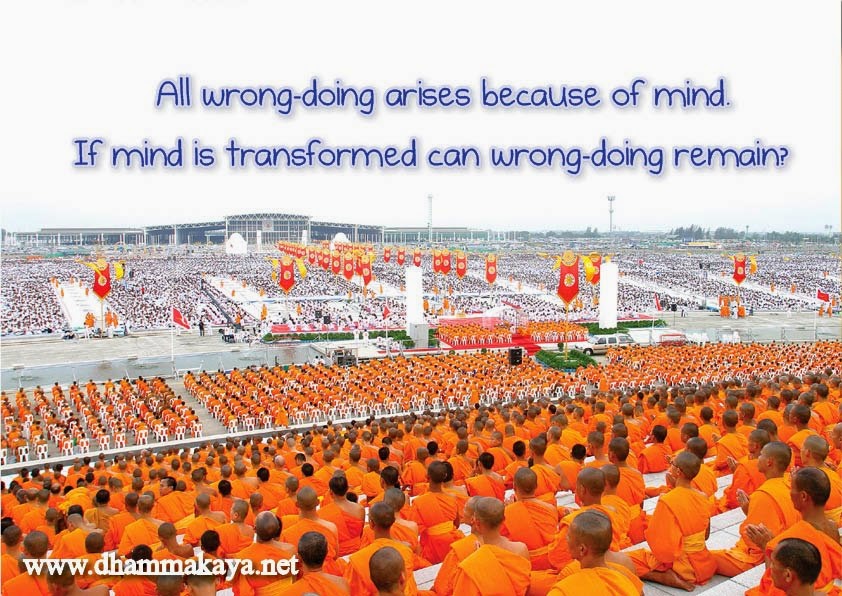 The four pathways to power are, according to the Buddha, essential aspects of realising liberation. The Buddha said: 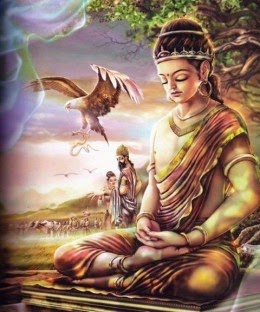 These pathways are initially mundane, which means they are an endeavour which all of us are capable of pursuing. Only when they have become powers, are they supramundane and constitute four of the thirty-seven factors of enlightenment.

Concentrated investigation of phenomena is an aspect of our moment to moment mindfulness, which enables us to see impermanence (anicca), unsatisfactoriness (dukka) and selflessness/non-self (anatta).

We are never without an object for investigation. Our thoughts and feelings are full of these three characteristics.
Depth of insight arises through the meditative process. Yet still we need to assist our practice by investigative thoughts and directions in daily living.

The four pathways to power are mundane when we are practicing and become supramundane when we have perfected them. They bring total liberation from dukka if the culmination of intention, energy, willpower, and calm and insight is achieved by us.
Posted by Ven.Sudhamma at 8:25 AM