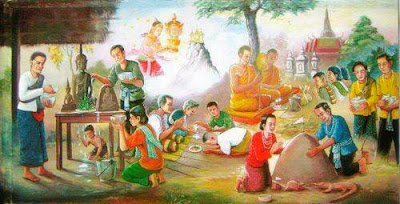 For those who wish to lead a virtuous life, should engage in the following Ten Meritorious Deeds.

“What neither mother, nor father, nor any other relative can do, a well-directed mind does and thereby elevates one (can do one greater good).”
Once a wealthy person harboured a lustful thought on seeing an Arahant. Subsequently he controlled his passion and entered the Order. Before long he attained Arahatship. Hearing of his transformation and attainment, the Buddha praised him and added that a well-directed mind could bestow great blessings such as would not be within the power of even a mother or a father to confer.

One’s parents love one immensely. They can give one all the worldly things lavishly. But when it comes to the fruits of higher life-liberation and the winning of the ‘deathless’ solely by one’s own self. The developed mind is one’s best friend.

What is a well- directed mind? 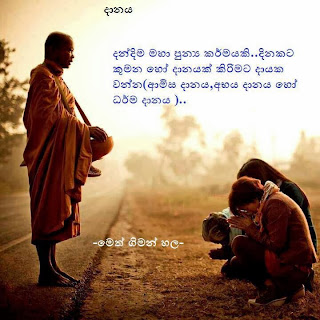 1.   Dana – Charity-Generosity.-the moral act of giving one’s possessions. It occupies a vital role in Buddhism, as greed, hate and delusion have to be eradicated to reach the ultimate goal of liberation from samsara. Generosity yields happiness in the present life and the life to come.

2.   Sila- Virtue or Morality- Keeping away from evil done through the doors of the body and speech. Therefore it is the cetana of right conduct, right speech, and right livelihood.

Morality of householders - Gruhasstha Sila relates to the laity. The householders are expected to take the three refuges and observe the five precepts or Ajiva atthamaka Sila (nitya sila) throughout life and the eight precepts or ten precepts on full moon days or any other day convenient for such observance.

3. Bhavana – Mental Culture – is meditating or contemplating on either the forty exercises for the attainment of mental tranquillity (Samata)or the salient marks of Tilakkhana - impermanence, misery and absence of a substantial entity (Vipassana/Insight meditation). Vipassana is an insight into the true nature of things or seeing as they are. In Satipattana Sutra the Buddha explains how to develop and cultivate the mind.

4.  Apacayana- Reverence – paying respect and reverence to the Buddha, Dhamma and Sanga, to parents and other elders, to teachers and any others leading virtuous lives. Paying respect is shown by worshiping, offering flowers, or by getting up from the seet. This is mentioned in Mangala sutta as Puja ca pujaniyanam.

5. Veyavacca – Service-giving assistance to those worthy of respect and mentioned above, as well as to the sick, old and weak people. Keeping the home, the school and the temple clean and tidy too comes under service.

6.   Pattidana – Transference of merit- requesting another to share the merit or moral deeds done by a person. Conferring merit to the dead, to the Devas and all beings and wishing them to be well and happy.

7.    Pattanumodana -   Rejoicing in other’s merits-sharing the merits offered by others and rejoicing in the same. Rejoicing in good deeds even without the knowledge of the doer comes under this. (A man who rejoiced when Jetawanarama was offered to the Buddha acquired equal merit as Anatapindika).

Karma simply means action. A deed performed by bodily action, speech or thought. Its result is Vipaka.There is a law of casualty, and it is because of this law that kamma, the cause, is invariably followed by vipaka, the result. Kamma is individual because it is the “cetana” – volitional action of an individual mind. In the Anguttara Nikaya, (6:63) the Buddha explained volitional action as;
“Volition Bhikkhus is what I call action; for through volition one performs actions of body, speech and mind.”
In either case his/her kamma, be it wholesome or unwholesome, will be his own. In the event of sharing of merits, this again depends upon cetana, an act of will. When a good deed is performed and the merit is shared with others, there must be the will to share it on their part. By approving the deed they produce a similar good cetana is formed in themselves. Their attention must be drawn to the deed, so that they can rejoice in it and generate a good mental impulse connected with Dana (liberality), or whatever the meritorious deed may be. Again the “sharer” makes his/her own kamma. We cannot share demerit, because nobody would be willing to share it with us.
8.   Dhamma Savana – Hearing the Dhamma-hearing the Dhamma with a pure mind for the purpose of practicing morality (sila), concentration (samadi) and insight (panna/wisdom).

10. Ditthijju Kamma – Forming correct views-forming right understanding of the Four Noble Truths and freedom from incorrect views such as the erroneous opinions (micchaditthi).