THE SUCCESS OF THE BHIKKHUNI ORDER - ON THE BINARA POYA DAY


THE SUCCESS  OF THE BHIKKHUNI ORDER    (Celebrating the Binara Poya Day) 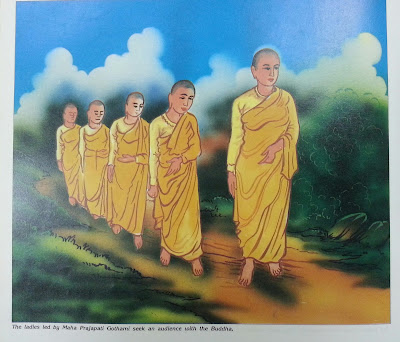 In India, before the time of the Buddha, when a husband died the widow was expected to jump into the funeral pyre to follow him
into the next world. Women accepted their inferior position for
such a long time. They were quite ready to believe that they were born as women because of their previous bad karma and they were made to believe that they were born as punishment for evil deeds done in the past, and the only thing they could do was to accept
their fate uncomplainingly and hope to be born as men the next time round. The Buddha was fully aware of the treatment of woman in India during this time. This position of woman in India is important for us to appreciate the contribution made by the Buddha to raise the status of women in society. When the Buddha instituted the order of Bikkhunis (Buddhist Nuns), it was considered a great innovation and it drew much criticism.
After he had begun the Order of Bhikkhus, many women approached him to start an order for them. Initially the Buddha refused this request, because he was very aware of how dangerous it was for them to live on their own without the protection of their menfolk. On the other hand the Buddha was aware that there were many women like Yasodhara, Maha Prajapathi, Kema and Uppalawanna, etc.; who had fulfilled their (parami) Perfections through many lives with him, and will attain Arahathship and  be his Great Female Disciples in his ministry.

In fact it was Ven. Ananda, his personal attendant, who pleaded on their behalf emphasizing the fact that the Buddha recognised that woman were equal to men in terms of their capacity for attaining  spiritual perfection. After five years of his ministry, the Buddha finally agreed to institute the order of Bukkhunis, but he had to set up many rules to ensure their safety.  One example that is often quoted to prove that the Buddha was justified in having reservations is the famous story of the Arahant Uppalawanna. After this incident the Buddha made the rule that nuns have to live close to towns and villages and possible near a monastery for Bhikkhus.

On a Binara Poya Day, Mahaprajapathi Gotami, (the Buddha’s foster mother and aunt) together with five hundred other noble women walked all the way from Kapilavastu, to Vesali where he was residing, they stood outside the monastery with their bleeding feet and vowed that they would not leave until they were admitted into the order. The Buddha was impressed with their sincerity and their determination and performed the ordination himself. After Maha Pahaprajapathi accepted and agreed to abide by the eight conditions (atagaru dam), she automatically became a nun. 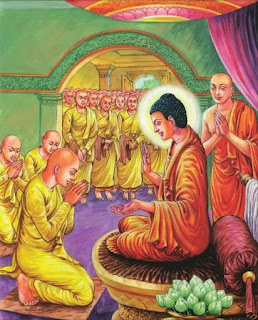 The establishment of an Order of Nuns with rules and regulations was something which the Buddha did for the first time in the world. The Buddha thus became the first religious leader in history to create an Order specifically for women. For the first time women were recognized as the spiritual equals of men, equally capable of attaining the highest pinnacles of spiritual perfection.  Those stories about famous women and stories from the inspiration from Enlightened Nuns during the Buddha’s time serve to highlight the tremendous equal opportunities the Buddha gave to woman to liberate themselves from centuries of maltreatment and discrimination by both society and religion. In fact the movement became immensely successful, drawing to it women from all walks of life.


Finally women were treated as equals and they found the opportunity to realise their fullest potential. Some people regarded this movement as a social problem and critized the Buddha for creating social instability by undermining the superior role of men. But the movement could not be stopped, because essentially it grew from realisation of the TRUTH. It can be stated that it was only in the 20th Century that a second such opportunity was made available for woman to enjoy equal rights with men. With the establishment of the Bhikkhuni Order The Fourfold Assembly of Fourfold Sanga was firmly established in the Buddha's Ministry. (Bihkkhu, Bihkkhuni, Upasaka, Upasika)
No other religious leader had given such a high religious position for women in his religion
.