LIKE A GARLAND MAKER, A LEARNER ON THE PATH WILL COMPREHEND THE DHAMMA


Like a Garland-Maker, a Learner on the Path will Comprehend this Well-Taught Dhamma 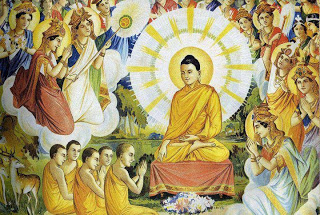 “Who will comprehend this Earth (self), the world of Yama, and this World together with the Devas? Who will investigate the well-taught Path of Virtue, even as an expert (garland-maker) will pick flowers?”

An expert in making garlands will select, pluck and arrange flowers into garlands. In the same way, who will examine the nature of life penetratingly? Who will perceive the real nature of life in the world, along with the realms of the underworld and heavenly beings? Who will understand and penentratively perceive the well-articulated doctrine, like an expert maker of garlands, deftly plucking and arranging flowers?

The question was raised as to who will penetrate the well- articulated doctrine? The present stanza provides the answer:

The student, the learner, the seeker, the apprentice, the person who is being disciplined. He/she will perceive the doctrine, like the expert garland-maker who recognises and arranges the flowers.

It is the learner, the seeker, the student who will perceive the world of Yama, the realm of Heavenly beings and existence on Earth. He will discard and determine the various areas of the Doctrine, like a deft garland-maker who plucks and arranges the flowers into garlands.

Story;
Five hundred monks, after accompanying the Buddha to village, returned to the Jetavana Monastery. In the evening, while the monks were talking about the trip, especially the condition of the land, whether it was level or hilly, or whether the ground was of clay or sand, red or black, the Buddha came to them, “Monks, the earth you are talking about is external to the body; it is better, indeed, to examine your own body and make preparations for meditation practice..”

Sekho – A noble learner, a disciple in higher training, is one of those seven kinds of noble disciples who have reached one of the four supramundane paths or the three lower fruition, while the one possessed of the fourth fruition, or Arahatta-Phala, is called ‘one beyond training.’ The worldling is called ‘neither a noble learner, nor perfected in learning.

Aseka - It is an Aseka disciple who understands him-self and the whole world as they really are. There is no graceful English equivalent for this difficult Pali term.
“Adept” (= one who has attained) may be suggested as the closest rendering.

“Vijessati” = “ attana nanena vijanissati”= who will know by one’s own wisdom (commentary).
“Self” – That is one, who will understand oneself as one really is.

(“Sugathi”) - “Sadevakam” – The world of the celestial beings. They are referred to as the radiant ones. Heavenly beings, deities; beings who live in happy worlds, and who as a rule, are invisible to the human eye. They are subject however, just as all human and other beings, to repeat rebirth, old age and death, and thus not freed from the cycle of existence, and not freed from misery. There are many classes of heavenly beings and six celestial planes. These seven are regarded as blissful states. 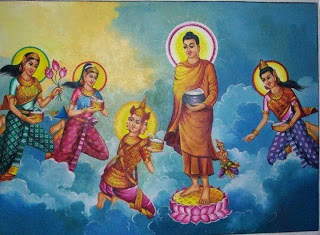 Devas - Literary, sporting or shining ones. They are also a class of beings who enjoy themselves, experiencing the effects of their past good actions. 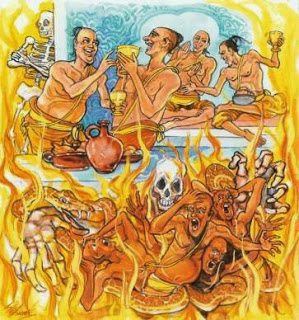 Yamaloka:
The world of Yama, Yama is almost synonymous with Mara
Mara:
Mara is the Buddhist “Tempter” –figure. He is often called ‘Mara the Evil One’ or Namuci (“the non- liberator,” the opponent of liberation). He appears in the texts both as a real person (as deity) and as personification of evil and passions, of the worldly existence and of death. Pali literature often speaks of a “five-fold Mara”
1. Mara as a deity
2. The Mara of defilements
3. The Mara of the aggregates
4. The Mara of Karma-formations
5. Mara as Death.

Mara is equated with Death in most instances. ‘Death’ in ordinary usage, means the disappearance of the vital faculty confined to a single life-time, and herewith of the psycho-physical life process conventionally called “man, animal, Personality, Ego,” etc., Strictly speaking, Death is the momentary arising dissolution and vanishing of each physical-mental combination.
By the realm of Yama – are meant the four woeful states – Hell is not permanent according to Buddhism. It is a state of misery as are the other planes where beings suffer for their past evil actions.

Kusalo:
In this context this expression refers to expertise. But, in Buddhist literature, kusala is imbued with much significance. Kusala means -”karmically wholesome” or “profitable”, salutary, and morally good, (skillful). Connotations of the term, according to commentaries are: of good health, blameless, productive of favourable karma-result, skillful.

It should be noted that commentary excludes the meaning “skilful” when the term is applied to states of consciousness. In psychological terms: “krarmically wholesome” are all those karmic volitions and the consciousness and mental factors associated therewith, which are accompanied by two or three Wholesome Roots, i.e. By non- greed and non- hatred, and in some cases also by non- delusion. Such states of consciousness are regarded as “karmically wholesome” as they are causes of favourable karma results and contain the seeds of a happy destiny or rebirth.

From this explanation, two facts should be noted:

(1) It is volition that makes a state of consciousness, or an act, ‘good” or ‘bad’
(2) The moral criterion in Buddhism is the presence or absence of the three Wholesome or Moral Roots.

The above explanation refers to the mundane wholesome consciousness. Supra mundane wholesome states, i.e. The four paths of sanctity have as results only the corresponding four Fruitions; they do not constitute Karma, nor do they lead to rebirth, and this applies to the good actions of an Arahat and his meditative states which are all karmically inoperative.

Dhammapada –
The commentary states that this term is applied to the Thirty Seven Factors of Enlightenment. More information on this topic will be discussed in the future.